Expressing individuality, one necklace at a time 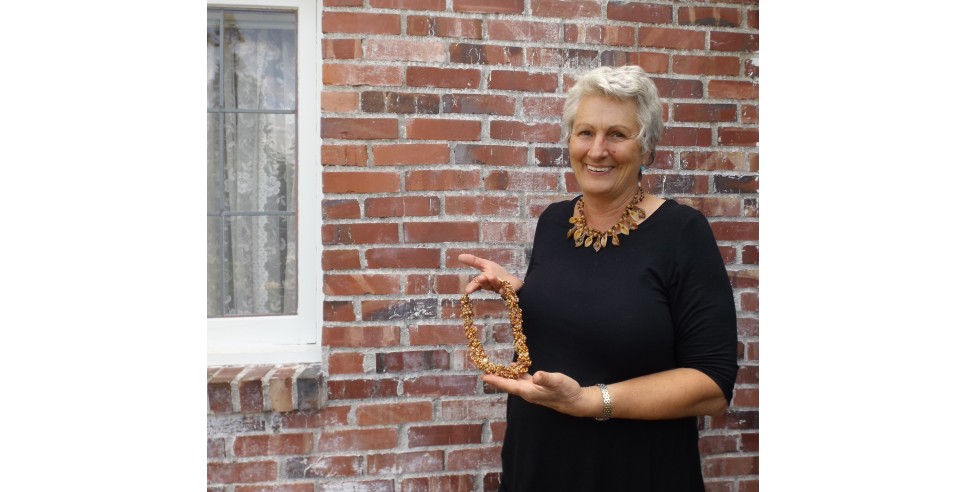 Anita Corby loves color.  Growing up in Germany, she was educated in art and painting. She served as an apprentice for four years in a photography studio.

And then as often happens, life tossed in some detours: Corby moved to the United States as a war bride, raised her kids, took jobs to pay the bills, and entered into a second marriage.

Eventually she resumed her creative career, and for the last seven or eight years, her focus has been on designing jewelry.

On a recent afternoon in her home overlooking the southern stretch of Puget Sound, she took time out from making arrangements for an upcoming show to talk about the intersection of art, fashion and nature.

“You look at Mother Nature, you look at leaves, you look at fruits, you look at flowers – you can’t get it any better than that!” she says, the accent of her native Germany still apparent in her speech. “Nature is an artist truly – the colors are in concert with one another.”

Corby believes that everyone is born with an innate sense of beauty and an intuitive sense for shape and color. But she thinks the entertainment industry wields too much influence in dictating styles and setting trends.

“People forget that they have their own mind, their own sense of ‘what works for me.’ They’ll take whatever is the style of today and squeeze themselves into some godawful thing just because somebody else told them to.”

With her jewelry, Corby is determined to help change that mindset. Each piece she creates is one-of-a-kind.

She works with a wide assortment of semi-precious stones – quartz and amethyst, topaz and jade, turquoise and tiger’s eye.

Sometimes friends bring her baubles from their travels. Sometimes she supplements her supply of materials by prowling through pawnshops, looking for discarded necklaces that have elements she might use to create something new.

She designs her own clasps, and some of her necklaces feature an aggregation of strands that can be added to or individually removed, depending on the effect the wearer wants to create.

Corby sells at select art shows and has a presence online at https://www.anitacorbyart.com/jewelry.  She’s interested in cultivating relationships with a few brick-and-mortar boutiques, but hasn’t yet found time to pursue that avenue.

Primarily her clientele has been built through word of mouth. Once a year, Corby puts her inventory on display in her home and throws a party for customers. That’s what she’s preparing for at the moment, and the richly colored pieces glow in the sunlight streaming in through the windows.

Corby lifts up one necklace after another to show the special details that have gone into each piece: beads from Africa, repurposed copper buttons, a talisman of iridescent art glass.

“There’s a concept that fashion is about what’s ‘in’ right now,” Corby says. “I don’t concur with that at all. I think you can make your own fashion every day. The world is full of shapes and beautiful color and lovely things – so take it all and have a party with it!”