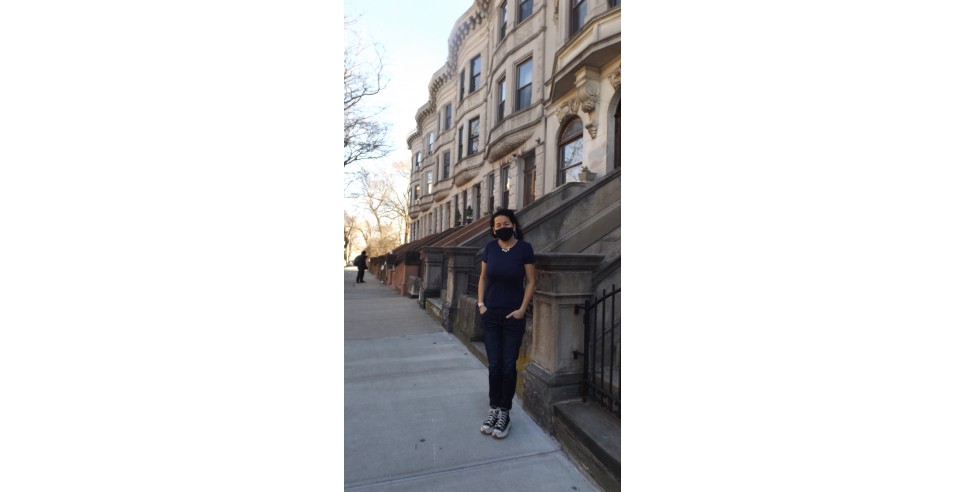 The world is at sixes and sevens right now – Russia’s unprincipled attack on Ukraine, the global pandemic, climate change, racism, gun violence and more. It wouldn’t be a stretch to assume that this litany of anxiety-producing events could lead to a worldwide mental health breakdown, but on a tidy street of brownstones in New York City, Rose Deler is trying to reframe her outlook.

“It can get overwhelming,” the Dominican-born artist says. “I cannot heal the world, but I can organize in my own neighborhood.”

Deler has lived in the U.S. since her parents moved to New York City when she was just two years old. Most of her siblings and school friends moved away from the city once they grew up, but when Deler thought about the proverbial house with a picket fence in the suburbs, “I felt a shiver run up my spine.”

She was determined to stay in the city. But it wasn’t until Deler and her husband found a townhouse tucked into a small historic district on the Upper West Side of Manhattan that they could leave apartment living behind and take the big step of home ownership.

The house was a fixer-upper – there were holes in the ceilings and all of the woodwork was painted over. But it was part of a row of brownstones that had been designated a New York City historic district in 1970 and then were listed on the National Register of Historic Places three years later. The Jumel Terrace Historic District also includes a stately apartment building that Count Basie and Paul Robeson, among others, once called home.

And, at the end of the block, the Morris-Jumel Mansion has presided as a house museum since 1904. But its history stretches back much further than that. The oldest existing house in Manhattan, it served as a headquarters for George Washington during the Revolutionary War, and later Aaron Burr called it home when he married widow Eliza Jumel. The Mansion also was where Anne Northup (wife of Solomon Northup of Twelve Years a Slave fame) found employment after her husband had gone missing.

But what really captivated Deler were the lives of the families who previously had made this neighborhood their home. When she moved to the neighborhood 15 years ago, a neighbor gave her a CD containing images of the Ettlinger family, one of the first families to buy into this block of brownstones when they were first built 120 years ago.

“I was fascinated to see pictures of everyday folks living everyday lives…. They were people just like me, working, playing and living,” Deler says.

“It is rare to find these personal artifacts that link you to the past of the space you occupy now.” 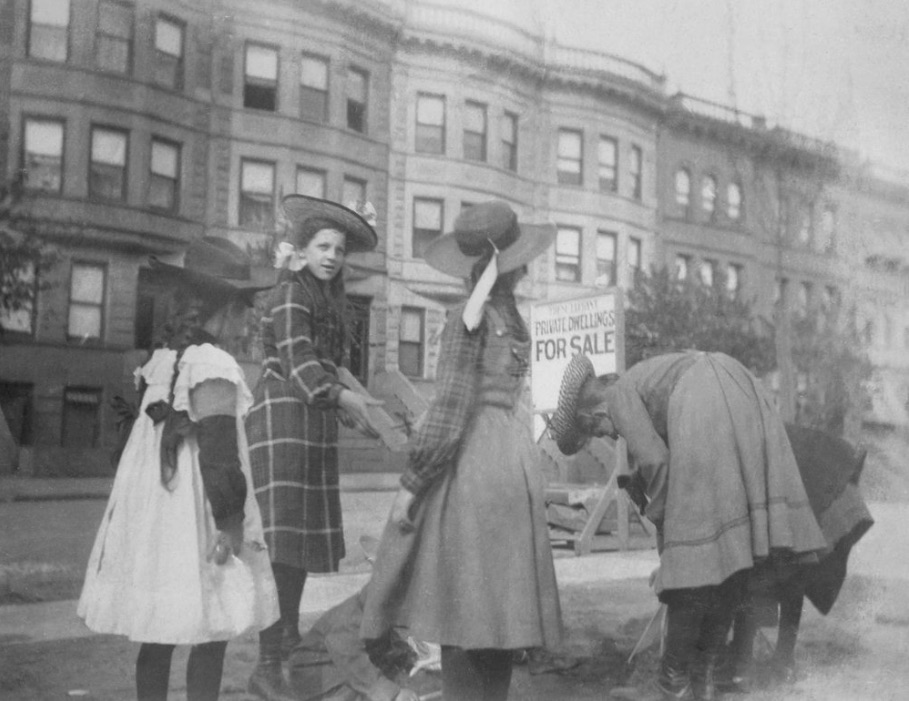 As an artist, Deler regularly finds inspiration in ephemera and artifacts to create her own work. Through the neighbor who had given her the CD, she was able to connect with Wesley Burton, the great-great-grandson of original owner Ida Ettlinger, to ask if she could borrow the album from which those images had been derived in order to scan the photos. Burton not only shared the album with her, he also told her that since he had no family to pass it along to, she was free to keep it and make use of it.

As it turned out, this century-old photo album served as the inspiration for History Now, an exhibit of Deler’s work that is now on display at the Morris-Jumel Mansion through April 3. Using 4” x 5” and Rolleiflex medium format film cameras, Deler persuaded her current neighbors up and down the block to pose in front of their homes for a portrait, and to share their stories of how they came to live in this block. The exhibit also includes choice photographs from the old Ettlinger album so that visitors can compare the images between past and present.

“The facades are the same but the faces have changed,” Deler says.

Learning about the stories of her neighbors not only today, but also of the people who came before, has only strengthened the sense of connection that began with the formation of a local neighborhood association about a decade ago.

Deler, who has served as secretary for that group, says it was “mainly a need to have a little control of what was happening in our neighborhood.”

Neighbors had banded together to help expose a “pain management clinic” that had opened up at the end of the street for what it really was – a front for an illegal drug operation.

“I can’t do things that are way above my head, but that really helped me not have the sleepless nights,” Deler says.

On a lighter note, the neighborhood association also holds an annual summer festival and community picnic, a Halloween party for the kids, and donates to the nonprofit that runs the Morris-Jumel Mansion. Neighbors turn out for a street beautification program every fall, planting bulbs in the tree wells up and down the block.

Through all of that, they’re growing roots in the community, too.

Deler says that it’s that feeling of connection and looking out for one another that provides the neighborhood with peace of mind. And she wants to convey those essential elements of community going forward.

“History Now is my preservationist effort. In one hundred years, we will be the faces of our neighborhood’s past.”

Photo Credit: One of the historic photographs that inspired Rose Deler's History Now exhibit now on display at the Morris-Jumel Mansion: Children on 162nd Street. 1901 - re-print 2021. Gliclée print on archival fiber paper. Courtesy of the descendants of the Ettlinger Family.