PR for People The Connector October 2019 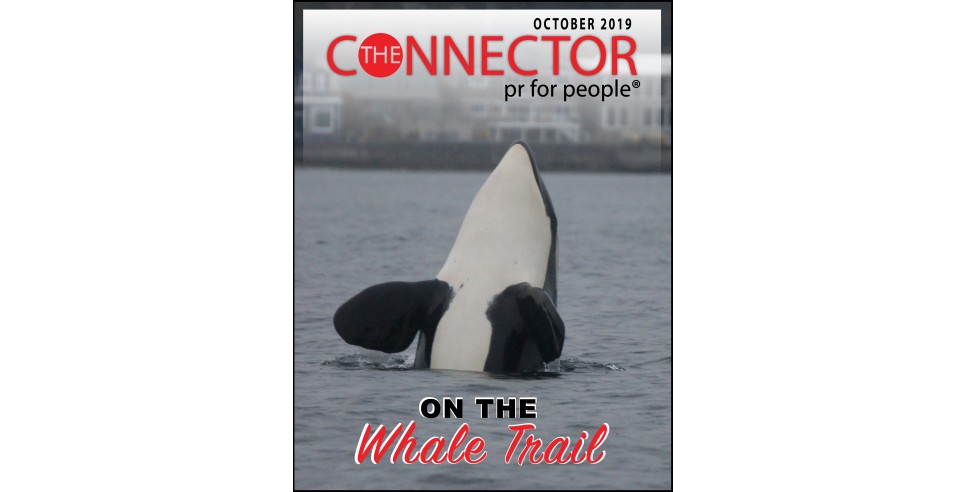 In the October issue of the Connector, we journey along the whale trail to encounter the majesty of orca whales. Barbara Lloyd McMichael has written an outstanding feature article about Donna Sandstrom, who was appointed by Washington Governor Jay Inslee to serve on the Southern Resident Orca Task Force. In this instance, “Southern Residents” refers to an extended orca clan, comprising several pods, that sometimes travel together in the Pacific Northwest.  Donna Sandstrom is also the executive director of The Whale Trail, a nonprofit that encourages whale-watching from shoreline sites. If you don’t have time to read the article, you can always download our podcast.

I can think of few animal sightings that are more satisfying than spying an orca pod migrating through the waters of the Pacific. Some indigenous cultures feature orcas in mythology as the souls of humans. Maybe that’s one small reason why spotting an orca feels like such a lucky stroke—you might be gazing upon one of your ancestors! These mammals are usually thought to be inhabitants of the ocean, but they are found worldwide in many seas and other coastal waters, including the Puget Sound.  You can spot an orca in the most unexpected places. This summer I happened to be walking five minutes from downtown Seattle through Myrtle Edwards Park, when not far from shore, an orca calf was lolling in the water.

This month, we profile an unusual library as a companion piece to the feature article. If your curiosity about orcas is piqued, and you’d like to do a “deep dive” into orca lore, the Seattle-based National Marine Mammals Laboratory/Western Region has an excellent library for marine mammals and offers extensive research materials focusing on orcas. Just one hitch, the library doesn’t offer drop-in dives. You must book an appointment in advance to examine their materials.  –Patricia Vaccarino