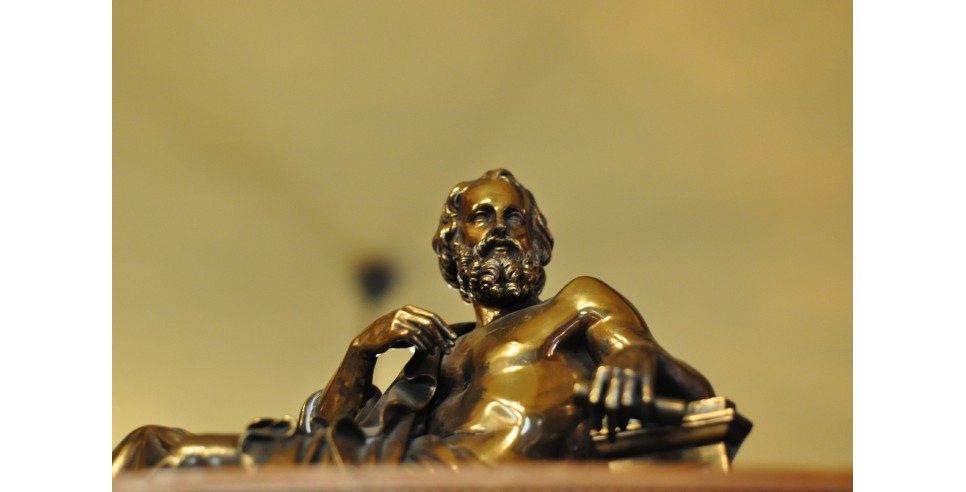 The renowned twentieth century mathematician-philosopher Alfred North Whitehead famously remarked that the whole of western philosophy is nothing more than a series of “footnotes to Plato.”  Or perhaps it could be called variations and elaborations on Plato’s themes, especially in his three major treatises on social justice and the state – the Republic, theStatesman, and theLaws.

Plato’s insights about the nature and purpose of society were profound; his diagnosis of the many dysfunctional kinds of government, and their root causes, still rings true more than two thousand years later; and his ultimate prescription for how to construct an equitable, harmonious, and durable political system remains the most successful model that has ever been devised.  Perhaps we should all go back to school at Plato’s Akadēmeia(Academy)…. briefly.

To a biologist, every organized society in the natural world, from leaf cutter ants to humankind, is at heart a “collective survival enterprise” – an orchestrated, cooperative effort to meet the basic survival and reproductive needs of its members.  And the key to their success is the enormous economic advantages -- the synergies -- that result from specialization and a division of labor (or what I like to call a combination of labor).  Although Plato didn’t use our modern terminology, he fully appreciated the foundational importance of the division of labor.  In his classic dialogue, the Republic, he wrote:

No human being is self-sufficient, and all of us have many wants.... [So] let us construct a city beginning with its origins, keeping in mind that the origin of every real city is human necessity.... [But] we are not all alike.  There is a diversity of talents among men; consequently, one man is best suited to one particular occupation and another to another.... We can conclude, then, that production in our city will be more abundant and the products more easily produced and of better quality if each does the work nature [and society] has equipped him to do, at the appropriate time, and is not required to spend time on other occupations....

Accordingly, a harmonious social “organism” (an analogy Plato himself used) is one in which everyone contributes a fair share for the good of the whole, and everyone benefits proportionately.  Plato defined social justice as “giving every man his due.”  The seldom used subtitle of the Republic is “Concerning Justice.”  However, most societies fall short, Plato concluded.  Very often there are sharp differences in income and wealth among the population, and this can lead to serious social conflict.  As Plato put it: “Any State, however small, is in fact divided into two -- one the State of the poor, the other that of the rich – and these are [forever] at war with one another.”   Indeed, if the poor are driven to extreme hardship and deprivation, the conflict between the rich and poor may explode into violence and destroy the state.  When the poor have nothing more to lose, the social contract that binds any society together may break down.  Desperate people will do desperate things.  To make matters worse, Plato noted, many governments are incompetent, or corrupt, and, as a result, fail in their prime responsibility to serve social justice and the common good.

Plato’s “prescription” for how to resolve this ubiquitous problem was rooted in his core conviction that objective knowledge is the key to good government, and a good society.  Plato liked to quote the maxim coined by his mentor, Socrates, that “virtue is knowledge.” The underlying idea is that deep knowledge and enlightenment will lead an individual, and a society, to virtuous behavior.  We are all subject to base and destructive motives and impulses, but reason and self-control must prevail.  In Plato’s words: “Ignorance is the ruin of states.”

The challenge, then, is how to design an enlightened and virtuous system of government.  Every state needs leadership (and policing), but the basic institutional problem is how do you control the leaders and get them to act wisely for the common good.   As the Roman poet Juvenal later expressed it: “Quis custodiet ipsos custodes?” Who will guard the guardians?  This was Plato’s great dilemma – and ours as well.

Plato’s initial solution, in the Republic, was to create a class of carefully chosen, nurtured, and selfless “guardians”, one of whom would ultimately be selected to serve as an absolute (albeit wise and just) monarch.  In Plato’s view: “Until philosophers are kings, or the kings and princes of this world have the spirit and power of philosophy, and political greatness and wisdom meet in one… [states] will never have rest from their evils."

To support his enlightened “statesman” (benevolent dictatorship) model, Plato also proposed certain institutional changes that were designed to prevent personal conflicts of interest among the guardians.   They would be reared and trained communally; they would not be allowed to hold property; and they could not procreate and raise families.  (It’s worth noting that Plato’s model was, in fact, later adopted by the Catholic Church and has been practiced, imperfectly, to this day.)

To his everlasting credit, Plato later came to recognize that his philosopher-king model was not workable in a large, complex economy and society – for a variety of reasons.  It was an ideal that, as he later expressed it, could only exist “in the Heavens.”  (Indeed, even the Catholic Church has had a flawed history with the Platonic model, to put it mildly.)  So, in his final essay the Laws,written just before he died, Plato developed what he called a second-best alternative model.  After a lifetime of observing political systems in many different societies, Plato had concluded that there are, in fact, only three basic forms of government -- rule by the one, or the few, or the many -- and that each of these forms can either be effective or corrupted and deeply dysfunctional.  An enlightened monarchy can devolve into a tyranny; an aristocracy can erode into an oligarchy; and a democracy can dissolve into mob rule or succumb to a demagogue.

Plato in the end came to believe that the most effective and most durable model was a “mixed state” in which all of the various classes and interests are represented and where there is mutual accommodation and compromise.  There must be strong leadership (a monarchical element), but this must be “balanced” and constrained by a democratic element.  The collective knowledge and needs of the citizenry, and of public opinion, must also be consulted.   But most important, everyone (including especially the leaders) must be bound by the rule of law -- not as an arbitrary set of social rules but as an embodiment of the accumulated wisdom and experience of a society that has been adapted over time to changing circumstances.  Plato had come to view an effective legal system as a surrogate for the constraining wisdom of a philosopher-king.  He called it “the golden cord of law.”

We have added many institutional mechanisms to support this basic model over the past two thousand years – elections with secret ballots, representative legislatures, constitutions with bills of rights, a separation of powers and checks and balances, an independent judiciary, universal public education, a free press, and more – but we have not improved on Plato’s basic vision.  Indeed, we have only strengthened and reinforced it -- or lost our way and rejected it, especially during this trying time.  The Platonic mixed systems that we (somewhat erroneously) call democracies, are deeply threatened these days by lying and power-seeking demagogues, corrupt exploitative oligarchs, and would-be dictators who seek to undermine the common good and enrich themselves at our expense.  We must abandon the misplaced yearning for an all-powerful, all-knowing philosopher-king.  The rule of law must be our “guardian” – our sovereign.

So, what is the most important take home lesson from this brief visit to Plato’s Academy?  It is that any “virtuous” and effective government may be able to serve the common good, but a mixed democratic system undergirded by the rule of law and strong institutional supports remains the best and most durable model.  As Winston Churchill wryly remarked, “No one pretends that democracy is perfect or all-wise.  Indeed, it has been said that democracy is the worst form of government, except for all those other forms that have been tried from time to time.…”

Yes, but it is also clear that we cannot take it for granted. Democracies die when they are corrupted, when the rule of law is undermined, when lies and liars obscure and distort the truth, when educational systems atrophy, and when the common good is replaced with extremes of wealth and poverty and there is open war between the rich and the poor.  Plato gave us the basic vision for good government – and a timeless warning about what is at stake if we lose it.  It is up to us to fight for it.