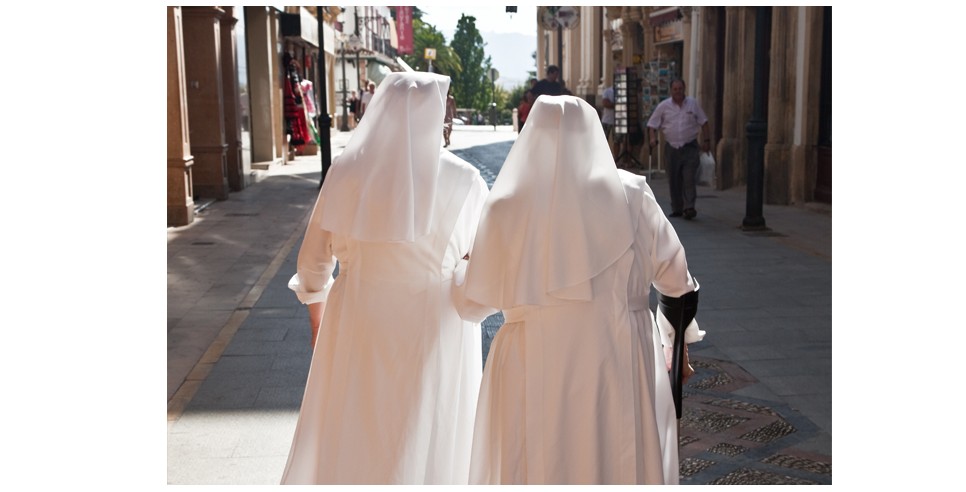 Pope Francis travels the world commingling with the common folk. His every smile and ceremonial laying of hands iscaptured in all forms of media. The Pope has stated in numerous press conferences that women could have a greater role in the church. But the Pope has also made it abundantly clear that only men can be priests.

The message is one and the same: Women have a place in the Roman Catholic Church, so long as they do all the grunt work, but they will never have any prestige, power or financial dignity.

A recent papal review, “Doctrinal Assessment of the Leadership Conference of Women Religious,”noted:

The Holy See acknowledges with gratitude the great contribution of Women Religious to the Church in the United States, as seen particularly in the many     schools, hospitals and institutions of support for the poor, which have been  founded and staffed by Religious over the years.

We could examine the changing role of womenin the Roman Catholic Church and whether women should be ordained as priests, but instead the true story about how the Church feels about women is told by showing how the Church does not provide financial support for its aging sisters. The nuns, who toiled away as the rank and file worker bees in schools, hospitals and homeless shelters, are the backbone of the Church’s mandate to serve the people of God. And yet, as more convents are shut and parishes become extinct, the Church’s aging sisters are left without pensions, Social Security benefits or any viable means of financial support.

The Church’s declining influence in America, however, hasn’t had a disastrous impact on its overall financial holdings. A recent article in Vice asserted, “By 2005, the Catholic Church had spent $1 billion on legal fees and settlements stemming from priests sexually abusing children. Yet Church leaders have allocated no funds to take care of elderly sisters, and while priests’ retirement funds are covered by the Church, the sisters have no such safety net.”

Despite the mounting costs incurred defending priests, clergy and parishes in a barrage of pedophilia claims and sexual assault cases, the Roman Catholic Church is still very rich, and its true worth hovers well beyond $8 billion in cash and equities – and that’s without factoring in its real estate holdings and other assets, including its trusts and endowments.

The Catholic hierarchy is unequivocally composed of men who both ignore and shut out women by relegating them to the status of caretakers, who are indeed more subservient to man than they are to God. According to an article in the Detroit Free Press, “The large number of Catholic sisters who once staffed schools are now in retirement and struggling to cope with healthcare costs and underfunded pensions.”

During their working careers, Roman Catholic Nuns worked for reduced wages, if they were compensated at all. Many sisters did not receive any salary. In order to draw benefits from the American Social Security system, a person has to have paid into the system by having worked at least 10 years. Since many working nuns received no salary, they are not eligible to receive Social Security benefits. Funding the retirement of aging nuns is made through private donations and nonprofit organizations.

One group that provides for the costs of retirement for aging sisters is the national Retirement Fund for Religious. Each year, through parish churches, Catholics are asked to contribute to the fund.  The donations are strictly voluntary and are used to help pay for the basic needs of elderly nuns, as well as brothers and priests who have lost their parish and are not affiliated with any archdiocese.

Many retired nuns are forced to apply for Medicaid, thus swelling the ranks of those who draw from the welfare system. This is especially ironic when the Roman Catholic Church is not required to pay the requisite income taxes or property taxes that feed the coffers for the U.S. federal and state government social welfare infrastructure.

While the cost of living and healthcare continues to rise, the aging sisters are not taken care of by the Church. Instead, private funding is sought from members of individual Catholic churches.  For example, Catholic churchgoers in Michigan contributed more than $1.5 million to the Retirement Fund for Religious last year, according to the fund’s annual report. The national Retirement Fund for Religious collected $27 million in 2012 and distributed $23 million to 440 religious communities across the U.S., mostly congregations of elderly Catholic sisters.”

It is important to note that many religious communities do their own fund-raising to help pay for expenses and are eligible to apply for the grants. Joseph Zwilling, a spokesman for the Archdiocese of New York, noted that the diocese gives $1 million a year to a national retirement fund."It's a problem for the orders to which the Church is responding," he said.

A donation of $1 million a year is essentially like putting a Band-Aid on a dead person.  The national retirement fund was started in 1988 and was only expected to last 10 years, but the need has increased. In 2006, its mission was renewed for a third, 10-year period. The Catholic News “reported that religious orders had invested $9.1 billion to cover retirement expenses, but were carrying a retirement liability of nearly double that amount.”

Sister Janice Bader, executive director of the National Religious Retirement Office (NRRO), said “a recent actuarial study showed that the unfunded need currently exceeds $4 billion. That amount is down from more than $8 billion in a similar study done in 2004. The Retirement Fund for Religious, the largest of several fundraising appeals for priests, sisters and brothers in religious communities, raises an average of $28 million annually.”

Private funds that have been set up to support the aging religious workers include the Retirement Fund for Religious, the Foundation for Religious Retirement and Support Our Aging Religious (SOAR), a Washington, D.C.-based group started by laypeople in 1986.

Elderly Roman Catholic nuns are facing a retirement crisis. Unlike the male-dominated patriarchs who control the church’s vast wealth, the sisters focused on service, austerity and received little or no compensation. While some religious orders required nuns to take a vow of poverty, the poverty meant a commitment to living a frugal and charitable life – one that required sacrifice. Sisters who took a vow of poverty did not intend to end up homeless, without any visible means of support or healthcare.

It’s no wonder the Sisters of the Most Holy and Immaculate Heart of the Blessed Virgin Mary refuse to sell their convent to recording star Katy Perry. The nuns have alleged that the Roman Catholic archdiocese is bullying them into making a sale. According to the New York Times, “[the] deal would pay about $10 million for the convent, but with little cash up front, while giving the archdiocese more than $5 million to buy out its long-term lease on a retreat house for priests.”

It has been further documented that aging nuns who have spent their lives in service by taking care of others have been forced to spend their final days in low-income, public nursing homes. Father Brian Jordan, from St. Francis of Assisi on W. 31st Street in New York City stated, "The religious women have, for a long time, been sorely neglected in our Church. All those who were served by these sisters should reach into their pocket and help them out as soon as possible."

With all due respect to Father Brian Jordan and other fair-minded members of the Roman Catholic clergy, it’s time that the papal hierarchy headquartered in Rome consider opening their hearts to the countless women who served the church, the people of God, and especially mankind.

The wide gulf between riches for men and nothing for women in the Roman Catholic Church is an atrocity. In effect, the church is killing the goose that lays the golden egg. For centuries, “women religious,” as they are defined by the church, have been an unending source of spiritual sustenance and a steady supply of low-priced labor staffing the myriad nonprofit organizations, hospitals, orphanages, schools and churches around the world.

Fewer women are choosing the demands of a sisterly lifestyle that rewards men and punishes women. In 2010, there were only 56,000 nuns in the United States, less than a third of their 1965 total. Without a steady supply of worker bees, the Church is causing its own labor infrastructure to crumble from within.

On April 29, during his weekly general audience in St. Peter's Square, Pope Francis said, "As Christians, we must become more demanding... [By] supporting with decision the right to equal retribution for equal work, disparity is a pure scandal," he said.

According to Vatican Radio, the pope was referring to divorce rates. Instead he might think about cleaning up the egregious gender inequality in his own house. There is something to ponder in the ecclesiastical meaning of the word “catholicity,” which means a wider range of interests, tastes, liberality, universality, and ultimately connotes wholeness. For the Church to heal the world of gender inequality, it must set a shining example by becoming whole unto itself and according women a place of power, respect and financial dignity.