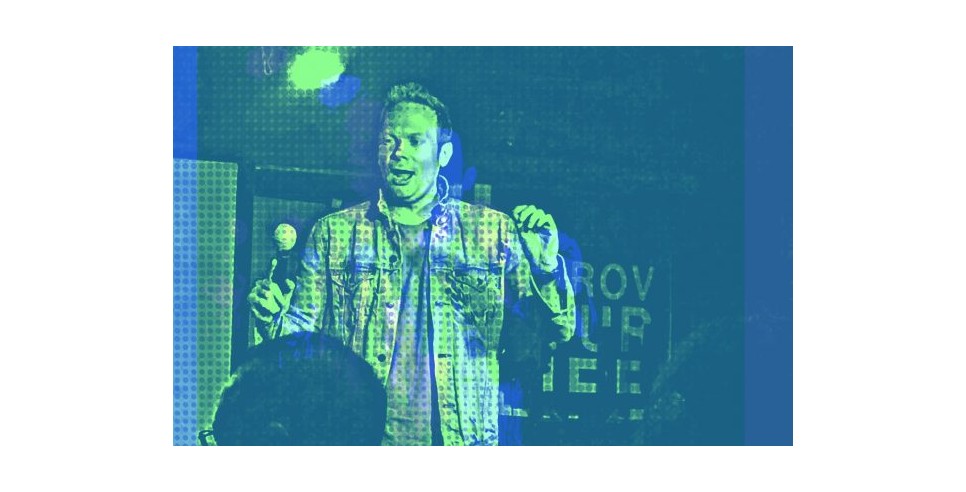 As I was coming into Gotham Comedy Club to see Finesse Mitchell who was headlining I ran into the man himself coming up the stairs from the green room, and he thanked me for always coming out to support. The room was packed and Chloe Hilliard was MC’ing. Chloe just got a book deal with Gallery Books the same publisher that did Amy Schumer’s book. It’s part of Simon and Schuster and she said it’s based on her childhood as a fat kid. No title yet. Not even a working title. I commended her on being able to get a book deal without even a working title. They must have really liked the concept. She was also really excited about just having opened the night before for Wanda Sykes up in Boston at the Women’s Comedy Festival sponsored by HBO, NBC and Showtime. Wanda knew her from her appearance on Last Comic Standing where Wamda was one of the mentors and where she got to see Chloe work. Wanda requested Chloe to open for her in Boston. Chloe’s book will be out in the Spring of 2019 and by then I’m sure she’ll have a title, cause it would be weird to have a book without one!

Finesse had a great show during which he does lots of impressions. When he came off stage I was there to congratulate him and he told me he had just finished taping a new special about a week ago at the Alex Theatre in Glendale called “The Spirit Told Me To Tell You” and he said they’re in the process of editing it as we speak!

I went down to The Duplex to catch an unusual Rooftop Comedy taping with Joe Devito, Kyle Ocasio and Vicky Kuperman, all recording one album together. The women had recently gotten back from performing for our troops overseas. Afterwards I spoke with Joe who told me had had been wanting to do an album but it would have taken him another year to get ready with enough material to do it on his own so he picked two comics who he respects to do it with and they’re calling it “Three’s Comedy.”

He said that working with two other comics who are “on the ball” was a great experience. They chose The Duplex because they wanted to do two shows and wanted to pack the room so they chose a smaller, iconic room. And it was great to see Andy Pitz again who opened the show, warmed up the crowd, and functioned as the MC.

Whenever I go to The Duplex I always think of Marion Grodin who produced shows there many years ago. A day later, strictly by coincidence I actually ran into Marion who told me she’s taping her very first comedy album at Gotham towards the end of May. There’ll be one taping with the great title, “I Have Only Myself To Blame.” And handling the taping will be comic Lenny Marcus who has state of the art equipment.

I went back to The Grisly Pear to check out PJ Landers Comedy Village show and once again it was packed, which is not easy to do in a bar show where you basically have to bark to get an audience. But there’s also a lot of return customers because they know it’s a good show. I ran into Joe Bartnick who’s been in from LA and who’s in the process of developing a show with Paul Virzi for Bill Burr’s All Things Comedy Network which is not not only audio but also video as well. Both of those guys open for Bill when he’s on the road. Details for now are secret but he did tell me about his hockey podcast called “Puck Off.” And Kenny Warren of Comics Cutting Comics was there and as he was running out he told me he’s shooting a pilot in early May. I’m assuming it’s for Comics Cutting Comics.

And then there’s the weekly show at The PIT produced by Jay Schmidt and Gianmarco Soresi called “The Last Laugh”, which they’ve been doing since this past September. It was a very eclectic mix of comedians, with a gay male comic, a gay female comic, and a funny guy I hadn’t seen before Jourdain Fisher. Jay told me that besides this weekly show he does a monthly show with his wife at The PIT loft called “Marital Bits” and it’s a very funny premise. Comics come up and talk about their spouses while the spouse is on stage heckling them.

But the headliner was Nathan Macintosh who brought such great energy to the stage accompanied by such original premises and great joke writing. I had seen him many times before but never for an extended set and it was really something special. I laughed consistently which I always notice because it doesn’t happen a lot. Many times I have to remind myself to laugh so people don’t think I’m a dick! What he also did that was funny was he announced that he wasn’t going to use the mic, but he wound up holding it the whole entire time just gesturing with it, and using it like a prop. Nathan is originally from Halifax, Nova Scotia and he’s heading up there tomorrow for the Halifax Comedy Festival to do three shows, two of which will be taped for TV in Canada and the other is a regular show where he’ll be doing 40 minutes. Most of the time you can see him at The Comedy Cellar where he’s a regular. At his longer show he’s expecting a lot of people from high school and even some of the teachers who liked him. The ones that didn’t like him he assumes will not be showing up. He’s also developing a cartoon which he’s getting ready to pitch around.

Roast Battle had Mike Cannon, Shuli Egar and Geno Bisconte as judges, and Neko White as the permanent host with the most. Adam Gabel, he of the raspy voice, took a lot of heat about the break-up of his marriage from Steven Boiles, whose hair was so long that from the back he reminded Adam of his wife. The headline battle was between Maddy Smith and Michael Verdi, both of whom were great joke writers. Maddy said that Michael’s girlfriend is bisexual. She likes men and Michael. And Michael said that Maddy suffers from a condition that will keep her from having children. It’s called “her face!” HILARIOUS!!!

The judges kept prolonging the outcome by making them do one more joke, and then finally let the audience decide because it was so close. Michael Verdi was declared the winner. Mike Cannon swore he was hallucinating through the entire thing. Maybe he had a high fever! It was great seeing Walker Hays who warmed up the crowd, and who’s just back from her Australian tour where she performed in the Melbourne Comedy Festival. She was there for two weeks and hung out with Sean Patton, and Wil Sylvince while she was over there. She stayed in a friend’s house and also performed in Sydney, and she said there’s a big difference in the sense of humor over there as compared to here, but it gave her the opportunity to write lots of new material. And she said “G-d bless those Australians. They start drinking at breakfast!” She said all the shows were packed because they do a great job of promoting their shows of which there were 500! That’s a lot of shows. But it’s spread out over a month. And she has Ronny Chieng from The Daily Show to thank for being there as he was the one who suggested her.

I asked her how the trip was flying over there and she said she broke it up by going to LA first, did a 9 P.M. spot at The Comedy Store and then took the midnight flight to Australia. Because the plane was about 50% empty she was able to fly comfortably stretched out over three seats for the 16 hour trip. Coming back home it was a straight 22 hours but she said it was worth every minute. New March Madness winner Napoleon Emil was hanging out and told me that since his win he’s getting a lot more spots.

And Roast Battle judge Shuli Egar told me he’ll be taping an album at NYCC in the manner of Stevie Ray Vaughan, the legendary guitarist who died in a helicopter crash in 1990, and of whom he is a big fan. I asked him if he was using music in his special and he said that Stevie Ray once made a double album, one where he was totally straight and the exact same songs when he was totally smashed. Shuli wants to do the same thing with comedy. One set totally straight and the same exact set totally trashed. He’s hoping to do it in the next couple of months with You Lucky Dog Productions headed up by Aaron Hodges former SiriusXM comedy jock where he used to do a podcast with Andy Fiori and Jason Shebiro, and then left in 2017 to open up his own production company/record label. His first release was from who he calls his “big brother in comedy” Costaki Economopoulos, who he had also done a podcast with and who took him on the road for the first time doing stand-up comedy.