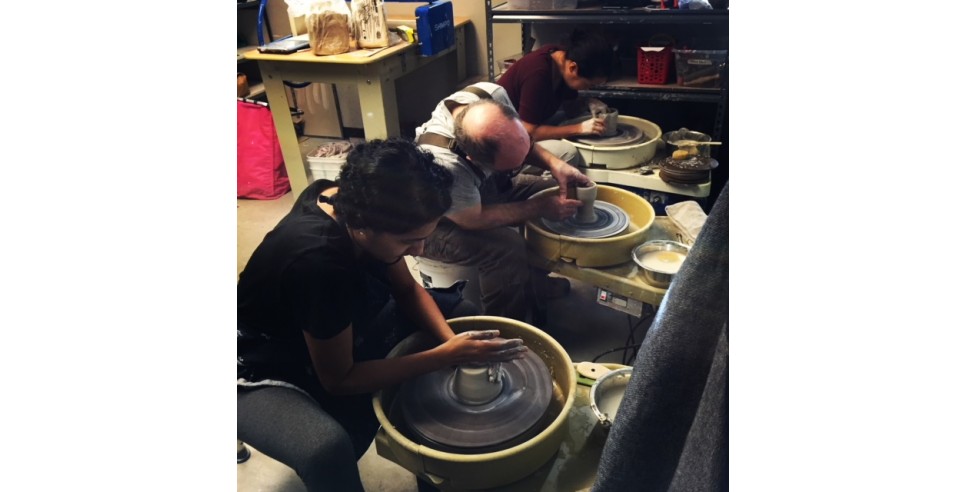 PR4P: Is there a correlation between the potter’s creative process and life?

GR: You have to learn how to throw stuff away. Everyone who does pottery throws stuff away. That wasn’t a hard thing for me but it was for many others. That’s a life skill and if they don’t have it. They keep trying to hold on to stuff that isn’t going to stay no matter what you do. People learn more from doing repetition in pottery and that’s a skill that is useful in many areas.  It’s very rare that If you have great talent you just do it. With few exceptions that’s not how it happens. By spending a lot of time doing the repetition, there’s a lot of philosophical stuff going on.

PR4P: What has been the greatest influence on your work?

GR: There is an influential book published in Japan 70 to 80 years ago by a famous master, Soetsu Yanagi.  The book was translated from Japanese to English by another famous potter Bernard Leach. You can’t underestimate the influence Bernard Leach had on U.S. pottery—huge! A lot of people actually worked in his factory, a small craft studio. Many came back, became professors and trained other people.  Some of these influencers are still around. Then on the other hand, there is a potter in Minnesota who said that it took him a year to unlearn some of the stuff he learned there. There is a whole other wave of people who are not thinking the same way as Bernard Leach and yet they have respect for his influence.

PR4P: Would you describe the process of using the wheel?

GR: The electric wheel is a little different in that you really don’t control the speed with your feet, so that takes some of the physical out of it.  Hands move at the same speed as the wheel. Having this circular motion or repetition around and around—it’s sort of hypnotic. A lot of people think of it as a calming or meditative experience. People talk about the metaphysical aspects quite a bit, but for me but it’s a little bit less metaphysical.  I would call it a meditation.  It’s like the idea of flow. Almost a timeless sensation. You lose track of time.

PR4P: Are there any new trends in pottery?

GR: The apprentice idea is not quite dead, but the studio concept is becoming more common in the US and in England. A woman potter on Vancouver Island has a studio specifically for young female potters who make bake ware and get free studio space and mentoring. There are other leaders of the ceramic community in the Northwest who make it possible for potters to make pottery as their primary source of income. In London, England pottery is booming and there is a long wait to get studio space. There is pottery reality TV show that takes place in an old ceramics factory, and can only be viewed on YouTube. This show has sparked a huge interest in pottery.

PR4P: What are some of the favorite pieces that you have made?

GR: I usually hate my stuff—that’s pretty common. It takes a long time before I like something that I’ve made. My favorite work is by a famous potter named Lucie Rie –she escaped Austria just before the Nazis, went to London and made famous pottery. She passed away in the 90s.  She was very influential and friends with Bernard Leach and yet their work could not be more different. A very small collection of her work can be viewed on Vancouver Island.

PR4P: What have you learned about yourself through your experience with pottery?

GR: I’ve learned better how to proceed through to completion, repeatedly—this is a very important life skill that I had not always been good at. I’m finally learning how to organize the garage, my studio at home. I get influenced by everything I see around me. I walk around and see man-made or natural items that can be used to make textures and things like that. I take pictures of things like lights.  I have a book on making musical instruments with ceramics. My ability to do that is limited, but still it’s pretty interesting. If what I make is different—that’s one thing, but if it’s different in a way that it didn’t meet my expectations, I’m quite aware of the difference. I have a quest for constant improvement.

PR4P: Are there pieces that you have envisioned and want to create?

GR: All kinds of stuff. I work with using cotton and cloth and other things embedded in a clay slip and taking those and making ultra thin forms. Using porcelain, it’s translucent; I’ve done masks like that. I’m interested in doing the sculptural stuff, but I need more development of skill.

NOTE: Greg Relaford has a show coming up: Sunday, December 17 at 12 PM - 4 PM. A Sunday Art Salon will be hosting a Pop Up Art Bazaar, where you will find original handmade treasures including paintings, ceramics, jewelry, fiber arts and more. Mount Baker Art Lofts 2915 Rainier Ave S, Seattle (Round Back on transit side!) 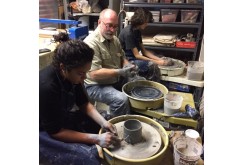 Potter Greg Relaford: A Journey Around the Wheel

The pursuit of a potter can be both artistic and metaphysical. The process of creating pottery can be the road map toward going inward to experience a powerful meditation. One of the most important stories in the bible is The Potter and The Clay, in which God is the Potter and we humans are the clay. Although the work of the potter presents as a powerful biblical story, the journey of the potter might not be religious at all and reside somewhere between the metaphysical and the contemplative.  After all, the motion of turning the wheel is repetitive and in that sameness a person can experience a powerful new revelation about one’s inner self. Turning the wheel is like taking one more journey around the sun.