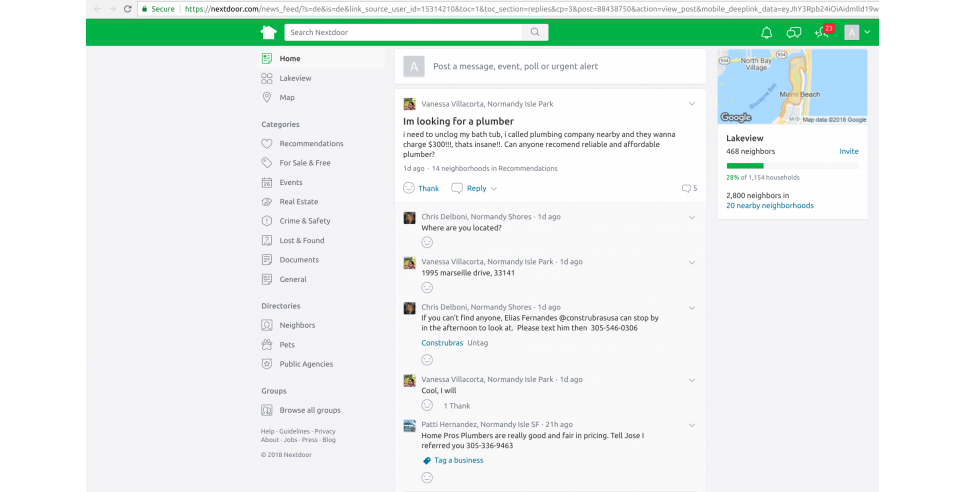 Who are you going to call when the garbage disposal backs-up on Thanksgiving or the electricity goes off over the weekend? Needing affordable help quickly is something we all experience. An emergency call to a plumber or an electrician could cost you that chunk of the money you have been budgeting to go away on vacation. Contractors might be everywhere, and yet…Are they dependable? Are they affordable? Can they get to your home quickly?

Miami-based Abylay Ospan has come up with a solution. His new company, AbsMap features a mobile app that allows end users and contractors to connect with one another in real time. Imagine Craig’s List paired with Uber! Contractors list their services with AbsMap the same way vendors place a listing on Craig’s List. With 77% of the nation using smartphones, Craig’s List still does not have a mobile app, whereas end users can search AbsMap for contractors and see who is available in real time near you.

Most contractors charge for travel time to a work site, especially when it’s an emergency situation. With AbsMap, an end user can check to see which plumbers are in the area and available to work.  Since the contractor is already in the area, there is no need for him to charge extra for travel time. The end user can get bids from different contractors to comparison shop for the best price. When contractors list with AbsMap to let end users know they are in the area, they are making their services available to more people, and are maximizing their time and efficiency, thereby cutting their own costs.

AbsMap is a boon to contractors far beyond the emergency need for plumbers and electricians. Think of housecleaners, gardeners, window washers, handymen, painters, carpenters, dog walkers, personal trainers, yoga instructors, music teachers, and much more. Virtually speaking, any independent contractor can list with AbsMap.  Similar in its business model to Airbnb and Uber, with AbsMap there is no intermediary to do the scheduling or broker the deal. The transaction is between the end user and the contractor; it’s a Customer to Customer (C2C) transaction, which makes AbsMap a C2C marketplace for the new gig economy.

More workers do not want to go into an office every day and have chosen not to opt-in for the traditional nine-to-five job. Instead these workers make their lifestyles the priority. They want to be free to make their own hours. And yet, they also want to hustle around the clock when they need to make money. For the growing roster of freelancers and independent contractors, AbsMap gives them flexibility and empowers them to decide when they want to work, how often, and how much they want to charge for each gig. AbsMap has the potential to become the go-to network for the new gig economy.

For Abylay Ospan his new company is a dream come true.  The name AbsMap is a play on his own first name Abylay, in the same way that Craig Newmark named Craig’s List. Abylay’s background in technology as an Inventor, Master Developer and Entrepreneur made it possible for him to see the how the problem of connecting contractors with end users could be solved. Abylay Ospan has deep expertise in technology and is CEO of NetUP, Inc., a Russian company that develops hardware and software. He founded the company with his friends and colleagues—all tech guys who are passionate about writing software for the ISP market.

Aside from being proficient in technology, Abylay is a homeowner himself, who was always struggling with jobs around his home: cleaning, gardening, windows. This became particularly critical after the hurricanes hit Florida and he was put into the position of trying to find someone to make repairs for the damages that had been caused by the high winds. All of the contractors were backed up with work and you couldn’t get one on the phone.  Abylay said, “If you go outside of your home, you can see contractors and you can ask them to come by after they finish a job. It suddenly occurred to me that I could make an application to fix this problem.”

While the idea of AbsMap was born from the aftermath of a hurricane, the magnitude of this application has far greater reach.  Abylay knew contractors could list themselves in a way that customers could easily find them, taking the headache out of home repair. He also noted that with AbsMap, you could be a contractor and a customer at the same time. Think of the dog walker who needs to hire a window washer and vice versa. So who knows where this will next lead? “This is a network of customer to customer, peer to peer, there is no agency to get in the way between us,” he said.

Initially the company will drive adoption in the greater Miami area, predominately among the Hispanic population that has an estimated number of 400,000 contractors.  After penetrating the Miami gig marketplace, Abylay plans to drive adoption in ten cities, before scaling throughout the U.S. He is showcasing his company on the technology circuit, including Y Combinator in California, so he can secure the funding needed to scale more rapidly. He is also thinking ahead about ways to rank contractors and to offer them a way to pay for premier listings.  He is also savvy about creating a rating system for contractors that is not at the mercy of fraudulent ads or fake accounts, but is authentic from the onset, and relies on full proof algorithms to assess the quality of the contractors. With clear icons and simple navigation, the AbsMap app is easy to use. The Gig economy needs an app like AbsMap so end users and contractors can connect with each other.  It’s a win-win for both.  End users get the help they need quickly and for the best price. Contractors are empowered to choose their lifestyles by being in charge of their own time.

Editor’s Note: We first wrote about Abylay Ospan in the August 2015 Connector Magazine.  For your convenience, we have included the link to the article here.