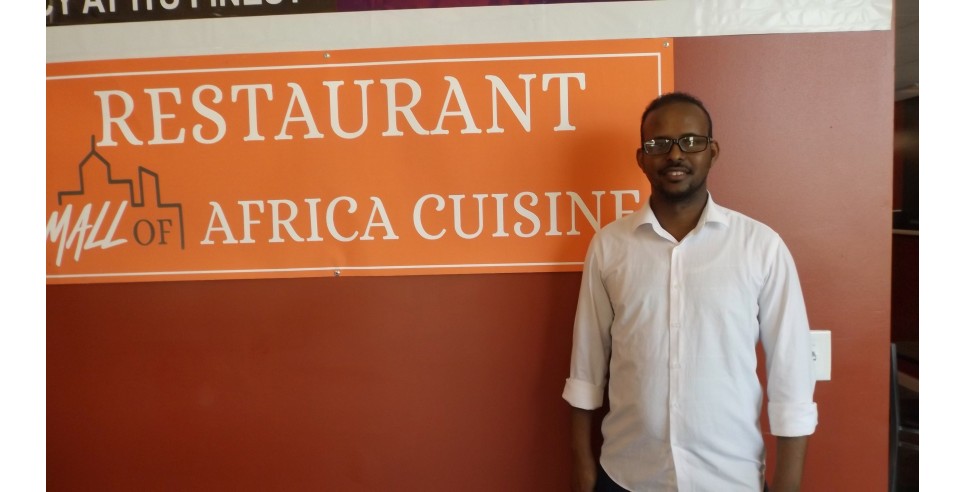 Just south of Seattle, after crossing the Duwamish River, old Highway 99 emerges from a heavily industrialized area and passes through the communities of Tukwila and SeaTac. Drivers will notice that this is where the four-lane roadway becomes International Boulevard. The name came about a few decades ago, in part to give more cachet to the arterial as it runs right past SeaTac International Airport. But it also reflects the growing diversity of the area, as recent waves of immigrants from Latin America, Asia, Africa and Eastern Europe have settled there, thanks to relatively affordable housing options and plenty of hospitality and other airport-related jobs that recognize multilingual employees are an asset.

Accompanying this trend, there’s been a rise in businesses that serve these newer populations. Tucked into the aging shopping plazas and odd little one-off buildings scattered up and down the Boulevard are a cheek by jowl assortment of henna salons, halal butchers, taquerias, pupuserias, menuderias, Asian groceries, Hajj travel agencies, and the like.

And then there is the Mall of Africa. Located in a building that once housed a discount grocery and an auto repair shop, the building was remodeled to serve as a marketplace catering to East African customers.

This ambitious project opened in February 2021 - in the midst of the pandemic - but as the Mall’s General Manager Isse Hussein explains, waiting until COVID went away really wasn’t an option. A redevelopment project a few miles down the road had displaced scores of immigrant-owned microbusinesses in 2019. Many of those business owners were single moms with little education, only limited proficiency in English, and few other employment options. Not only that, many of them, as refugees, still felt a responsibility to support their family members who remained in Africa.

The East African immigrant community overall recognized the desperate need to find new retail space for these entrepreneurs, and there was a scramble to provide help.

Isse Hussein was one of those who stepped forward. Hussein had been a refugee himself. The second youngest of eight siblings, Hussein was born in Somalia, where his family tended cows, goats and camels in the countryside. But civil war forced the family to flee when he was just a toddler. They ended up in a Kenyan refugee camp where conditions were difficult. Both his dad and a sister died, and Isse and three of his siblings remained in the camp with their widowed mom for the next 17 years.

In camp, Hussein had access to schooling, but not much else. “I remember being a student and not able to buy books, find uniforms, find lunch,” Hussein says.

But early on, he was attracted to science and math. And no doubt influenced by the conditions he witnessed and experienced in the camp, by the time he was able to resettle in the United States, he resolved to pursue a profession in the medical field. He began by taking care of prerequisite courses at the local community college, then went on to pursue his doctorate in pharmacology at Washington State University.

By 2019, he was a fully established pharmacist working in the Seattle area. But when he set out to assist these displaced entrepreneurs, real estate development was not a primary part of his skill set. Nonetheless, he partnered with three other East African immigrants – a nurse and two Uber drivers – to explore ways they could help.

Because of their Islamic faith, the partners didn’t have access to conventional business loans, which involve charging interest. “We had to knock every door,” Hussein recalls now. “Everything had to be from scratch.”

They looked at many different properties before finding this concrete block building, which previously had served as a discount grocery, then an auto parts store and an auto repair facility.

It cost close to $700,000 to renovate the former grocery space into a souk-type marketplace – and then, halfway through the construction, they faced a major setback: the construction site was broken into and burglarized. All of the electrical connections had been vandalized. There was no power to the site. This happened in midwinter, and Hussein had to rent generators and source the fuel in order for the crew to keep working.

He handled all of this on top of working his regular 12-hour days at the pharmacy. “It was,” he says, “a nightmare.”

But they persevered. Eventually, the first phase of the project was completed. The new Mall of Africa is equipped with 41 stalls – that’s 41 opportunities for local entrepreneurs to support their families. Today, most of the vendors at the Mall sell women’s clothing and beauty supplies – and the shops are busiest around the important holiday of Ramadan. But the space also includes a beauty salon, a barber shop, and a service desk that handles money transfers and overseas phone calls. And there’s a carpeted space dedicated for daily prayers.

Next in the planning stages: a grocery that includes East African specialty foods. “We’re trying to make it a one-stop shop,” Hussein says.

Even more than that, the Mall of Africa has become a community hub. It is giving East African immigrants a chance to engage in productive businesses and establish a foothold in the U.S. economy. And while raising their children as first-generation Americans, these entrepreneurs  still have a way to connect and take comfort in the languages and cultural expressions of their ancestral lands.