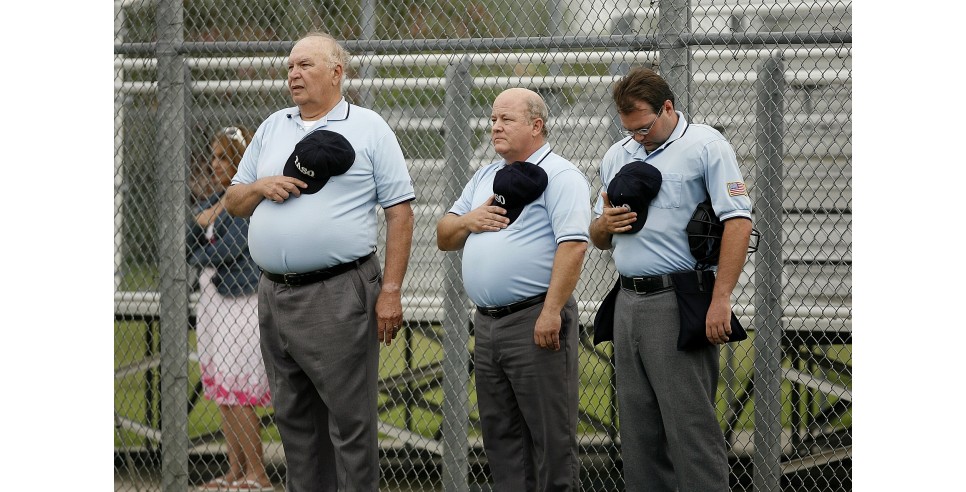 Three white, working-class men, heads bowed, wistful eyes, lips pursed in silent prayer, are visibly overcome with emotion. They are baseball umpires, pressing their caps to their hearts in a show of reverence for two Little League teams. While reverence appears in many forms, it shares one characteristic. It makes us feel as though we are both larger than life and smaller than an ant with great immediacy and certainty. Experiencing these paradoxical emotions in the same instance is powerful enough to take our breath away.

In his book Reverence, Humanities Professor Paul Woodruff defines the virtue of reverence as the combination of awe, respect and shame, but I beg to differ. There is no shame in reverence. Reverence engenders humility but being humble is not the same as feeling shame. There is no shame among the three umpires who clasp their baseball caps to their hearts. Awe, respect and humility, I say, that is what reverence is. The integrity and sanctity of baseball is much larger than the three men, or for that matter, much larger than any one of us. Reverence makes us feel large because we are deeply connected to something greater than ourselves.

It is important to have a trigger to remind us of reverence. Paul Woodruff’s book is just that trigger—a reminder to base our ethics on virtues rather than rules. He invites us to examine the qualities of being morally good that are dependent on virtues such as honesty, compassion, courage, and prudence....

Aspiring to embrace reverence in our individual lives is not an easy pursuit, even for those of us who write books about reverence or spend the time reading books that explore reverence. Reverence encompasses many virtues that are not held to be as valuable as the heavenly virtues found in Pilgrim’s Progress or the twelve virtues expounded in great detail by Aristotle.  Virtue has been shelved as archaic, no longer necessary when greed, power and corruption are the chief components needed to win success in the Twenty-First Century.

Our post-modern world has forgotten the virtues that set the tableau for reverence to spring to life with the same vivid imagery as the three Little League umpires whose caps cover their hearts. The noisy clatter of irreverent voices is everywhere and so confusing that we lose sight of what is in our heart and what tethers us together to make us the part of something grand and larger than ourselves. Do we show respect for one another? Are we losing sight of respect and how we show it?  Experience awe, respect, and humility—reverence offers us the ability to experience a full range of emotions in knowing that something is far greater than any one of us—in that proposition therein lies our great hope for humanity.