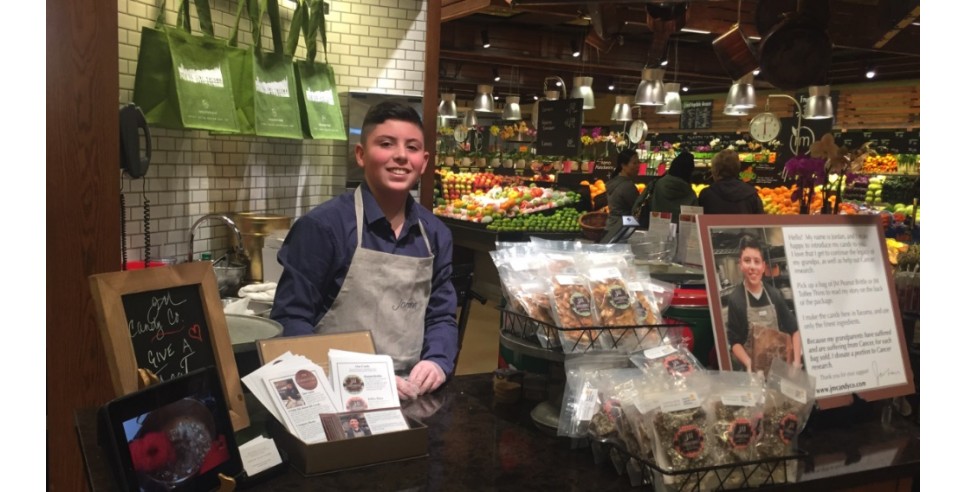 It’s another informal lunchtime seminar on the University of Washington-Tacoma campus.  Students – many of them veterans or active duty military from nearby Joint Base Lewis-McCord – come in with their backpacks and brown bag lunches and grab seats around a long conference table.

At one end, the featured presenter is fiddling with his PowerPoint and setting up a display of his merchandise. In contrast to the students’ laidback style, Jordan M. Allen is clearly the businessman in the group. He’s dressed conservatively: dark suit, white dress shirt open at the neck, a heavy watch on his wrist. When he’s done with his set-up, it’s still early, so he works the room, going around the table, introducing himself, shaking hands with everyone. In answer to a question, he says that he’s been in business for six years.

Which might not seem that remarkable, until you consider that Jordan is in the eighth grade. But after he’s been formally introduced by his host, and launches into his talk, there’s no doubt that this young man has developed significant business vocabulary and acumen over half a dozen years of growing his business.

He tells his audience that he’s had a passion for business since he was three years old – he remembers as a toddler going to his dad’s office in the Tacoma Financial Center and feeling right at home.

“I liked everything about that world.”

And he became an entrepreneur only a couple of years later, when his grandfather, John Mason Doyle, taught him how to make candy.

Doyle, a lobbyist in the state capital, had developed a widespread reputation over the years for the peanut brittle he made at Christmas and distributed to family, friends and colleagues. But when he proposed to share his recipe with his offspring and teach them how to make the candy, the only person who took him up on the offer was Jordan, who was a first-grader at the time.

Nevertheless, grandfather and grandson got together in the kitchen, and at his grandpa’s elbow, Jordan soaked up all the tricks of the trade. He learned about how to source the ingredients, and how to measure them carefully. He learned about the importance of bringing the candy mixture to exactly 292 degrees “because below that it’s not going to have that nice crunch,” and how to use a spatula to spread the mixture thin across marble slabs to cool.

By the end of that first candy-making session, the candy thermometer had been passed to a new generation: Jordan was hooked.

At first, Jordan followed in his grandfather’s footsteps by making the candy solely for family and friends – and his dad gave it as gifts to his clients.

But by the time Jordan was in second grade, he’d made arrangements to sell his candy in a store owned by friends of his parents. He branded his product JM Candy, using the first and middle initials in both his and his grandfather’s names.

In sixth grade, he ramped up his business by making an appointment with the buyer for a local upscale grocery chain.

At the lunchtime seminar, Jordan tells his audience how that meeting with the store director and her assistant and the buyer went. After touting his product, and answering all of their questions, and listening to them go back and forth in trying to decide, he decided it was time to cut to the chase.

They had a deal.

When asked what his candy has that the competitors don’t, he has a ready answer: “Love.”

“You can go buy a candy bar anywhere,” he explains, “but I want customers to know that I pour love into my candy. It’s not just an all-for-profit business.” “

A percentage of the proceeds from every bag of candy sold goes to support the Seattle Cancer Care Alliance. Three of Jordan’s grandparents have battled various forms of cancer, and he wants to put money into research that will bring an end to the disease.

“The big thing for me is giving back – that’s the cornerstone of my business,” he says.

Then he passes candy samples around the table, gives everyone attending the seminar a business card and a firm handshake, and heads back to middle school.