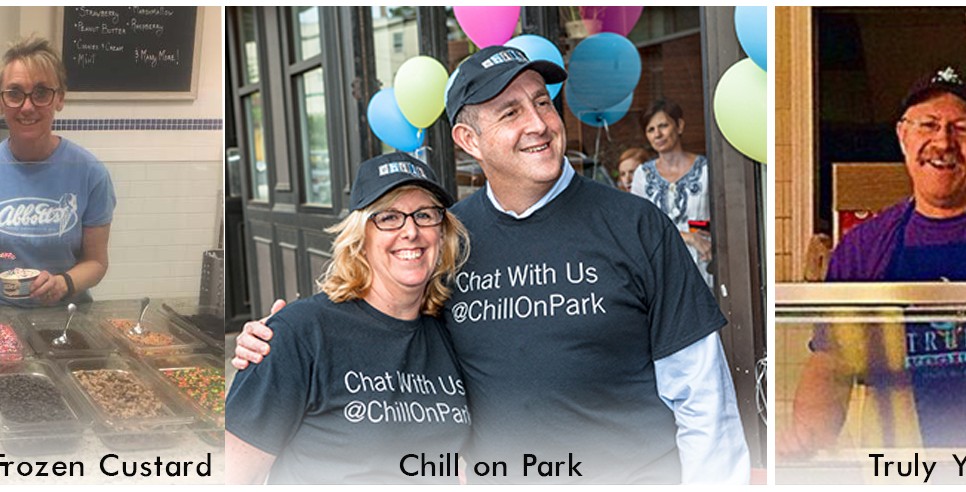 While it may be known as “home of the bean and the cod,” MA is also one of the largest consumers of ice cream per capita in the United States. In the summer, that is all fine and good. But how can the Bay State maintain this claim during its often brutal winters?
Well, when you have the type of quality products from local purveyors like Abbott’s Frozen Custard, Chill on Park (www.chillonpark.com) , and Truly Yogurt (http://trulyyogurt.com ), it makes at least a little more sense.

Though it was born and raised in Rochester, NY over 100 years ago, Abbott’s has made a major impact on MA with two shops in the Boston suburbs of Brighton of Needham that draw fans from all over New England. Boasting the first true frozen custard in New England, Abbotts offers a frozen treat that is so thick, creamy, and ice-chunk free, that it is worth braving the cold to enjoy a bit of delicious brain freeze.

“We are all about a fun family time,” says MA shop Manager Mary Pat Dauria (a Rochester native who was the first to convince the company’s founders to let her take their secret recipe over the NY border in 2007). “Ice cream is happy time!”

And when the ice cream is this good, it can make people happy even when the weather outside is frightful.

“There may be more ice outside than we care to admit,” Mary Pat observes, “but if you still crave a creamy treat with no ice in it, there is a great place to go- Abbott’s!”

In addition to founder Arthur Abbott’s signature slow-churned, egg-infused frozen custard, Abbott’s offers co-founder Thelma Schreiber’s frozen custard turtles and some of the best milkshakes ever made by hand. And while the standard flavors keep people coming back again and again, it is never a bad idea to branch out for seasonal satisfiers like their famous eggnog, gingerbread, butterscotch, peppermint twist and pumpkin flavors, any (or all) of which are perfect for private or office parties.

“MA residents not only consume large quantities of ice cream,” Mary Pat observes, “but they know what they like,”

Another area entrepreneur who has been giving the people what they want for a few years now is Wendy Issokson, co-owner of Chill on Park.

Though she lives close to Abbott’s, Issokson and her husband Alan are also passionate about the Fields Corner neighborhood of Boston, where Alan’s family has lived and worked for generations. So, when a part of the building in which Alan’s family’s insurance agency became available, Wendy and Alan decided to move in themselves and bring to their neighborhood a sweet place to eat and congregate.

“I created a mission and the business followed,” Wendy explains. “I am passionate about Fields Corner and wanted to create a gathering place for people of all ages.”
After researching area ice cream creators, as well as local coffee, tea, and pastry purveyors, Wendy put together the ever-expanding menu of foods that has enticed an ever-growing list of locals and dedicated fans from further away to come chill at Chill. She also made community connections to ensure that her staff is all local and that community groups could always find a place to meet and eat at her two-year-old shop. Chill also hosts private parties, staff meetings, and even story hours for neighborhood children.

“I have never worked in retail before,” Wendy admits, “so it is certainly a big change. The learning curve is a steep one and the teens that I employ are teaching me things and coming up with new and great ideas daily.”

No matter who suggests it, however, all good ideas are taken to heart and all opportunities to involve others are promoted with a goal of every guest having a great experience that reflects well on the store and the community.

“Everything we serve is top quality,” Wendy assures, “and it is always done with a smile!”

Another Needham-based ice cream entrepreneur is Gary Goldman, who runs Truly Yogurt in nearby Wellesley. Having been in the business since 1992, Goldman is the senior partner of the three super scoopers. And yet he also has another lifetime behind him, having worked as a financial controller for 15 years before putting down his actuarial charts and picking up his scoop.

“I wanted to own my own business,” Goldman explains. “I knew I wanted a business that wouldn't have that much overhead to get involved with and would have a huge upside that I could grow. Truly Yogurt fit that bill.”


As he knew the amount of ice cream his neighbors ate, Goldman found a sweet spot in a snazzy section of Wellesley and rediscovered his creative side.

“I like to eat food and create things with food,” he reasons, “so it was a good fit!”

While he admits that winters in New England can be “challenging” for anyone, let alone a frozen yogurt shop owner (no matter how beloved he or she may be), Goldman has been able to sock away enough “reserve financial fund” in the warmer months and also to expand his line to include such perennial items as cakes and holiday-themed specials so that he is able to keep his “core group” of customers coming back and engaging new one to keep the register ringing from Halloween through Valentine’s Day and then some.

“Also, the store is warm inside,” he points out, “and people still come in for their yogurt/ice cream/sorbet treat.”