Buyer Beware: Do you dare buy a Haunted House? 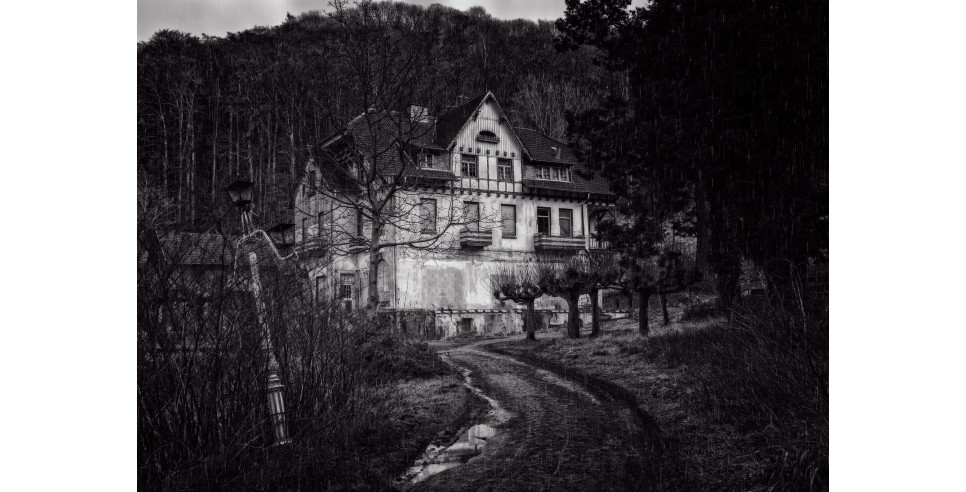 Would you buy a haunted house? Doors squeak open and slam shut. Sudden surges of cold air rattle windows in their old wood frames. Hazy apparitions are seen from the corner of your eye. Unexplained noises trill down the chimney. Icy wind kicks up in a conic burst, settling into strange wet spots under stairwells, in the back of closets and under the kitchen sink. Contents of drawers spill out. Your favorite things are lost, later found in strange, out-of-the-way places, and you know you didn’t put them there. In the middle of the night you do not walk alone into that dark, drafty room.

These are just a few of the things that go bump in the night, and it’s not your imagination.

For buyers untroubled by a home’s grisly past, haunted houses are available for a good price on the real estate market. Their low prices reflect the fact that the rumors of horror are well-documented and indeed real. From a purely pragmatic perspective, buying a haunted home is a good deal. According Realtor.com, out of 1,000 people surveyed, 33% said they would buy a haunted house.

Buffalo Bill's home depicted in the mega-thriller The Silence of the Lambs is now on the market with a price that cuts to the bone at $298,500. Lizzie Borden’s house in  Fall River, Massachusetts is now for sale at $899,000. An entire Colorado ghost town is available for $2 million.  Once one of the most beautiful homes in the city, a New York gilded-age mansion that is a dilapidated nightmare fit for ghouls is now listed for the low-low price of $495,000.

TopTenRealEstateDeals.com posted nine ghoulish homes and one ghost town with histories of horrors enough to strike fear in the strongest heart.  Check out this video of haunted houses.

These famous haunted homes are fodder for ancient lore and modern storytelling, but there are many other ordinary homes out there that are not so famous and give full credence to the phrase Buyer Beware.

Sellers put their haunted homes on the market every day without necessarily disclosing the homes’ spooky past. Western Michigan University Cooley School of Law Professors David Tarrien and Renalia DuBose have recently commented on how state laws may affect sales of a homes that are believed to be “haunted.”

David Tarrien advises that "the key thing as a home seller is that you disclose ANYTHING that is not readily visible and you think may affect the value of your house. This can range from fairly common circumstances, like leaks or potential flooding in the basement, to the more exotic and downright strange, such as a haunted house perception or noisy neighbors. If you don't disclose and the buyers discover these types of situations, they may be able to back out of the deal. It’s better to be safe than sorry – otherwise, you may not have a ghost of a chance making it to closing!"

Closing the deal is by no means the end of the line. If the buyers discover the ghostly invasion after they take possession of the home, (no pun intended), they could always sue the seller after the deal closes. “Take the case of Stambovsky v. Ackley which might  be the most famous legal case involving the disclosures of paranormal activity during the sale of a home,” said Tarrien. This case involved a stunning Queen Anne Victorian home that sat majestically above the Hudson River. The New York Supreme Court ruled there had been widespread awareness in the region that the home was haunted.

In this instance the buyer, Jeffrey Stambovsky, was not from the area and was not aware of the home’s ghostly past. After Stambovsky learned of the home’s troubled history, it was too late for him to get his deposit back. Tarrien notes that “The New York Appellate Court, ruled ‘as a matter of law, the house is haunted.’”  Their ruling was based on the past reports published about the home. “Through the court proceedings, Stambovsky was able to recover half of the deposit.”

While the Strambosky case is precedent in New York State, every state has different laws pertaining to the disclosure of haunted houses. Renalia DuBose, another law professor at WMU-Cooley, says that “laws vary from state to state about what sellers must disclose to potential buyers.”

“Under Stambovsky, when a homeowner tells others their home is haunted, they would have to disclose this information [to a potential buyer]. If a home has a reputation, or is known as a haunted house, it will need to be disclosed. The house in the Stambovsky case had both the reputation and the media coverage about it being haunted to require that it be disclosed,” said DuBose.

Looking for a new home that is the quintessential two-story Colonial with the white picket fence? A Frank Lloyd Wright style of house with entire walls of glass that is perched on top of a hill in the midst of a sun-dappled forest? The fifteen-room Queen Anne Victorian with a turret, a gazebo, and a bronze sundial in the garden? Don’t be deceived by the quaint appearance and low-low price. Evil lurks from under the antiquated floor beams and spills forth from the rafters, leaving a ghostly trail of bitter tears, and maybe blood. Stuck indoors with nowhere to go, you are doomed to be at the mercy of unsettled spirits until you can no longer stand living there. Nevermore quoth The Raven in Edgar Allen Poe’s immortal poem.

This Halloween, we’re sharing ghostly stories and tales of terror. We’ve all experienced a hair-raising experience or two. Do tell us stories born of your own devilish concoction.