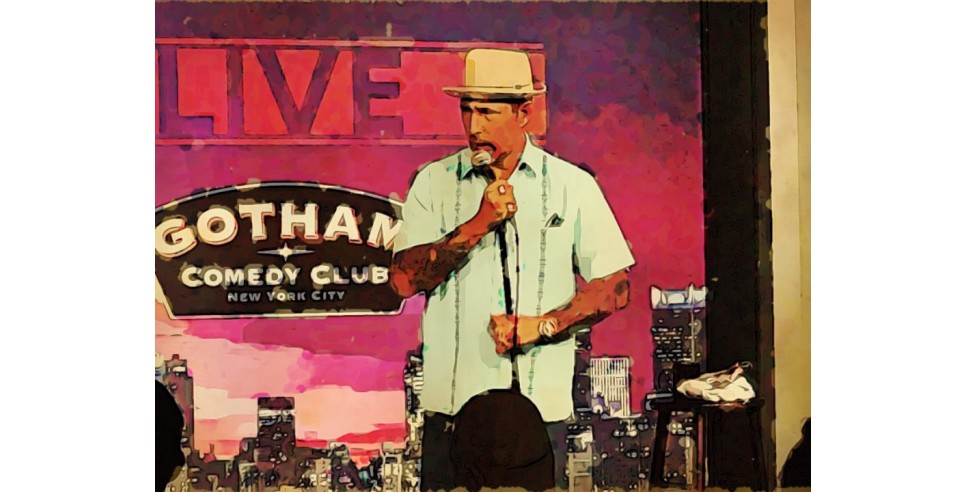 I stopped by Gotham to see Rich Vos’ headlining act and ran into Joe DeVito who was hosting. Joe said his Three’s Comedy album that he shot at The Duplex down on Christopher Street, (and I was there for it) with Kyle Ocasio and Vicky Kuperman will be available is already available for pre-sale. It’s a Rooftop Comedy project. Jon Fisch was also on the show and Rich Vos actually made me laugh out loud. I mention that when it happens because it’s very rare that anything makes me laugh out loud. I would hate to have an entire audience like myself that just acknowledges when something’s funny.

The bar area at Stand Up NY was hopping when I got there. Monroe Martin and Derek Gaines were hanging out with Calise Hawkins. Since The Stand closed for its move to 16th Street the regulars have had to find other things to do. Monroe and Derek started a podcast, just the two of them and it’s called No Need for Apologies. I asked them what it was about and they said it was just “two buddies talking about life.” Derek said, “two young Black dudes talking about life.” They’ve already done five episodes and when I asked them where they do it from Monroe said, “from the Monroe Martin Studios”! His house. They’ve also been going on the road together. Derek starts filming the new season of Tracy Morgan’s The Last O.G. today.

Calise Hawkins is now a Consulting Producer on Aisha Tyler’s new show on AMC called “Unapologetic” which coincidentally goes perfectly with “No Need For Apologies.” She said it’s a follow-up show to Dietland the way “Talking Dead” is a follow-up show to “Walking Dead.” Aisha Tyler leads a topical discussion around the broader, female-centric issues and themes that Dietland explores. Aisha talks with actors and producers, as well as celeb fans, journalists, writers, comedians and other tastemakers.” Some recent guests have been Gloria Allred, Julianna Margulies and Nikki Glaser who’s everywhere these days.

I stopped back to Stand Up NY later in the week to check out what was happening with the Roseanne Barr/Rabbi Shmuley Boteach podcast that they’ve been doing from the Stand Up NY Labs podcast network. Yamaneika Saunders came in and shared with me that she’s Kandi Burruss’ co-host on the new Bravo show Kandi Koated Nights which she described as a relationship love and sex show every Sunday at 9 P.M. Kandi is a singer, songwriter, actress and businesswoman best known for her starring role in Bravo’s “The Real Housewives of Atlanta” since it’s second season premiere. Yammie said she’s having a blast and is also waiting for the release of her Netflix half hour and a comedy album coming out later this year which she hasn’t settled on a name for yet. She taped the album at New York Comedy Club and the special in Vegas. Mike Feeney was there and he told me that he and his Irish Goodbye co-host Mike Cannon will be hosting a beer pong tournament next week at Skankfest at a place out in Brooklyn. And then Christine Meehan-Berg told me that she’s the new boob lady, Miss Pillows on the new webseries of the same name from Scarymommy.com. They’re creating a show around her about boobs, and it’s not only entertainment but also educational. Everything you ever wanted to know about “boobs, cans, jugs”, … and those were her words. It’s in production now and she said that every episode has to do with a different topic concerning boobs, and the first episode will be out in the next couple of weeks. She recently interviewed Jene Luciani who happens to be a friend of mine and who wrote the best selling “The Bra Book!” Christine summed it up by saying, “ At last something good came out of having saggy tits!” And you should have seen Dean Edwards making faces and talking baby talk to Christine’s baby, Piper. It was hilarious. Everyone turns into mush around a baby! We were reminiscing about our own kids when they were that little. Dean told me he’s working on a new hour for late night and also to record a special.

And finally Stand Up NY labs is responsible for the Roseanne Barr/Rabbi Shmuley Boteach podcast of which three episodes have already been done. They just released episode 3 with Roseanne and Rabbi Shmuley. The Rabbi is a close friend of Roseanne and he was happy to take her call to speak about the controversy. The rapport was so great that the Rabbi and Roseanne felt that podcasting would be a great new step. The club says, “Yes, it’s a polarizing figure to have on our “air waves” but we feel you should have an opportunity to explain your actions. It’s an interesting listen no matter your feelings. There are some great positive messages from the Rabbi and Roseanne in their discussions and there’s another side of Roseanne that may surprise you.”

Rabbi Boteach says that they held the first episode for four weeks not knowing if they were going to release it but he said they felt it would be helpful to people to do so. He said it’s about penance, rectification, restitution and addressing the pain we cause others as well as being about forgiveness. He says that apologies and forgiveness are almost dead in America and that needs to change. Someday when I’m ready, I’m going to tell my own Roseanne story of a terrible thing she did to me once, but we’ll leave that for another day.

I ran into Nikki Glaser this week down at The Cellar while I was sitting with Allan Havey who I’ve really been enjoying seeing on Billions. Allan and I go back to the days when I was a guest on his late-night talk show called “Night After Night” on The Comedy Channel which was the precursor to Comedy Central, and it had “an audience of one.” That is correct. There was one person in the audience. By choice! It ran from 1989-1992. Allan told me that two years ago he went to see “A Doll’s House Part 2” on Broadway, and he was so impressed with Condola Rashad’s performance that he actually said to himself, “Damn, I hope I get to work with her someday.” And now he’s on Billions with her where she does an amazing job, Allan said for him it was just “another dream come true.” He’s in town preparing for a performance in Edinborough at The Fringe Festival for his first time, but before he heads off to Scotland, he’s off to perform in Belfast, Manchester and London before he heads off to Scotland. Very busy man! He said he feels like “a boxer preparing for his big fight!” And then he added, “ And I love it!”

And Nikki Glaser stopped by for a quick hello on her way to do a spot at The Village Underground and she said that next Saturday she’ll be out in LA taping her spot for the Bruce Willis Roast. Dan Naturman was with Ian Fidance, and Godfrey was outside in the street shooting Facebook Live videos with Jax Dell ‘Osso.

Brendan “Jonesy” Jones is a comic but also a producer who’s got a regular show at Broadway Comedy Club, and when I dropped by to see what was going on, he had the big room downstairs and loads of comics waiting to go on stage. I thought I had lost my third audio recorder in a year at the club that night, but some honest person found it and returned it. Now I have to figure out how to download hundreds of my sets onto my computer so I never have to worry about that again.

West Side Comedy Club is excited about John Fugelsang’s monthly show Comedy Nation coming up this Thursday evening where they talk about hot topics of the day, with a panel and then they have a Q&A with the audience afterward. Some recent topics have been porn, gun control and pets vs. kids, and some of the guests have been Pat Dixon and wife Mandy Stadtmiller, Irene Bremis, Craig Fox, and Tamer Kattan. Manager Gina Savage told me that it’s one of her personal favorite shows. And she said I could say that! She was also thrilled with a Tweet from Artie Lange defending the club’s two-drink minimum policy. Some audience member tweeted something that they should do away with the 2 drink minimum which has been a staple of comedy clubs for years, and Artie took the time to write a long Tweet, basically an entire paragraph in defense of the two-drink minimum and praising the club, telling people to come and check it out.

In the meantime, hope you all had a great Fourth of July, and I’m OUT!!!