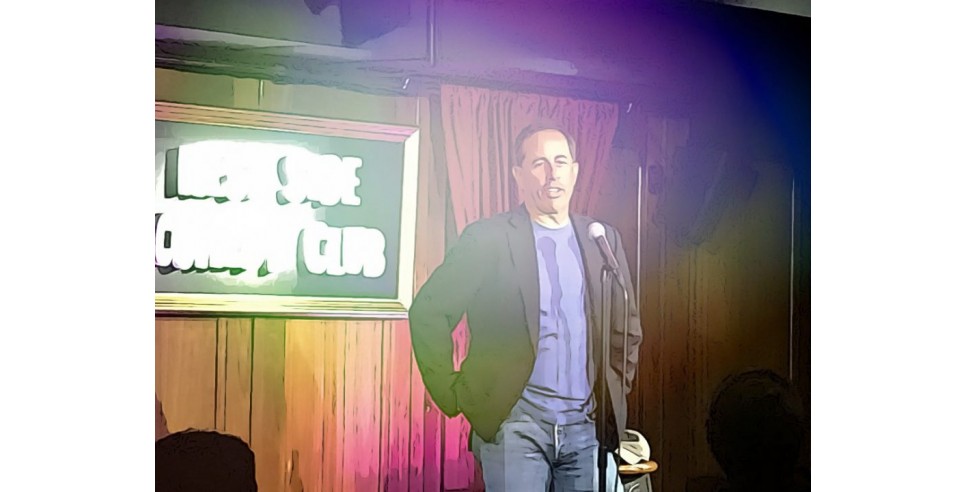 I was scheduled to go on second at West Side Comedy Club when GM Gina Savage came in and said that Jerry Seinfeld had Tweeted that he’d be stopping by around 8:30. That’s when people started streaming in. I caught a glance of Jerry walking down the stairs. He had his baseball cap pulled down low and was alone. He greeted a few people and shook my hand as he walked by. The comic scheduled to go on first had done 8 shows in the last couple of days and decided to leave. Gina asked Jerry if he wanted to go right up and he said he wanted to wait a minute so Gina looked at me and said “Jeffrey, you’re up.” Before I even had a chance to think about it or get nervous I was on stage while Jerry was in the room. Every time I dropped an “F” bomb I felt bad that Jerry had to hear that because he’s worked clean since 1976. Anyway Jerry went up after me to screaming and absolutely HUGE applause, and talked about many things including the weather, cell phones, and texting. Needless to say, Jerry killed with all of his new material, then did a Q&A with the audience which he likes to do. One guy tried to be funny because there’s always one of those and told Jerry that his father was as accomplished as Jerry was, and Jerry said, “ Is that your attempt at humor?” and the guy had to admit that it was. Another guy asked him what his favorite thing to do was and he said it was his show “Comedians In Cars Getting Coffee” and doing stand-up and then he did a special shout out to West Side as he said he loves coming by plus it’s in his neighborhood. When he finished he left as low key as when he arrived. By himself with his hat down over his eyes. It was a special experience.

I popped in to Stand Up NY to see what was going on and ran into Cipha Sounds and Dan Soder just chillin’ by the bar and waiting to go up. Cipha Sounds spent a lot of the summer on tour with Michael Che and they went to places like Texas, Chicago, Detroit, England and Ireland, not in that order I hope and definitely not in the order of excitement. I jokingly asked him if he thought Colin Jost would be jealous and he was like, “ No, I don’t think so. He’s hanging with Scarlett Johansson.” I had to agree! Dan Soder said most of his time on the weekends is spent on the road but from Monday thru Thursday, he stays in town to do The Bonfire with Big Jay Oakerson, which they’ve been doing for the last four years. He also started shooting the 4th season of Billions, and Dan’s part as Mafee has been growing every season. There was a short profile on him in the NY Post this past week on what he likes to do on the weekend in which they portrayed him as an actor who kind of dabbles in stand-up. He felt that it should have been the other way around. He considers himself a stand-up first, which is his great love, and THEN an actor.

Interesting fact: Of all the video interviews I shot up in Montreal with comedy superstars for my Comedy Matters TV channel, the video getting the most play is one I did with John Mayer. Coming up on 20,000 views in a week.

Tyler Fischer came out with a new really funny video about a self-help/recovery group of comedians who can’t help doing impressions. Tyler does a great Woody Allen, Adam Mamawala did a surprisingly good Morgan Freeman, four comics did Bill Cosby, and a comic named Jon Santori did such a great Louis CK I closed my eyes and could feel Louis in the room. I had to listen to it a few times because it was just that good.

Back at West Side I ran into Ian Fidance who was hosting the show and brought great energy to the stage, He told me he runs a monthly show in Brooklyn called “Picture This” a fascinating show where they bring in well-known animators from Comedy Central, Bojack Horseman, The New Yorker, Mad Magazine, and Nickelodeon, and they actually animate the jokes on a screen, while the comedians are telling them on stage. He said it’s a riot and the comics all say they have a blast doing it. It was started in LA by comics Sam Varela, and Brandie Posey who also do the show out there. Sam produces it on both coasts, so don’t bother hitting Ian up for spots and Brandi hosts on the West Coast while Ian hosts the shows here. The show will be seen in this month’s Brooklyn Comedy Festival and they do it every third Saturday on the regular out in Union Hall.

My buddy Wellie Jackson was there who I hadn’t seen in a minute and he told me he’s got a recurring spot on Orange Is the New Black which is amazing. He plays a guy named DJ who as he puts it, “is trying to talk to one of the stars.” I’m assuming it’s a girl! They shot some of his scenes in Tao right here in town, and they told him to be available from August through February. He said the funny thing was that when he went on the audition he originally went to try out for a part as a corrections officer. He thought the audition went great but he got called back the very next day for a different part. He said he didn’t do any of the lines that were in the script but improv’ed the whole thing and they loved it. He said that all the other guys were reading their parts, but he took a chance and took his off the paper. We agreed that only a stand-up comic could do something like that and have the presence of mind to improv on the spot after many years of stage-time. Most actors are locked into what’s on the page. Anyway just a few hours after the audition he got the call that he got the part.

AMarie Castillo had her birthday party at the Offside Lounge on East 14th Street and I had to stop by to wish her a Happy Birthday. It was packed with comics like Jason Scoop who made me promise to be at Carolines tomorrow night when he does his Break Out show, and I will be there, as well as Olga Namer, James Mattern, Walker Hays and lots more. AMarie is getting ready for a self-booked tour through 15 states with Paul Spratt who will be headlining while she handles the hosting duties. That has become her forte! She’ll be starting this week on Sept. 14th in Atlanta and flying all round from Thursday thru Sundays. She’s calling it the “Make Yourself” tour because she said she’s very grateful for all that she’s learned while in NYC in terms of producing shows and running social media.She echoed Frank Sinatra when she said that “if you can do it here in NYC, then you can do it anywhere.”

And I finished my comedy week over at Gotham Comedy Club to see Francis Ellis do his thing with Graham Kay as his opener. Graham Kay is a really funny dude with a very unique delivery and Francis does a lot of musical comedy. Francis had a keyboard on stage and opened with a song called “If Harvey Weinstein Had Been Gay” which at first I took to mean that he would have had more women, but then he made it sound like he was into men. Then when he told stories about his ex-girlfriends it got even more confusing, because he made it sound like he was into both sexes. Either way he was funny and had a great singing voice as well, and did several original funny songs. Not parodies of existing songs but totally original songs. At one point he stopped the show to tell a woman who had been bothering him the entire show that he hated her. He made it funny but I’m pretty sure he meant it.

Last but certainly not least I have been asked to start a comedy night at a beautiful nightclub in midtown on East 54th Street called Le Reve, (The Dream). It’s a gorgeous room, with a fantastic restaurant, and it will be happening every Monday night at 8 P.M. starting Oct. 1. Stay tuned for more details but it will be amazing. Comics are going to love it!