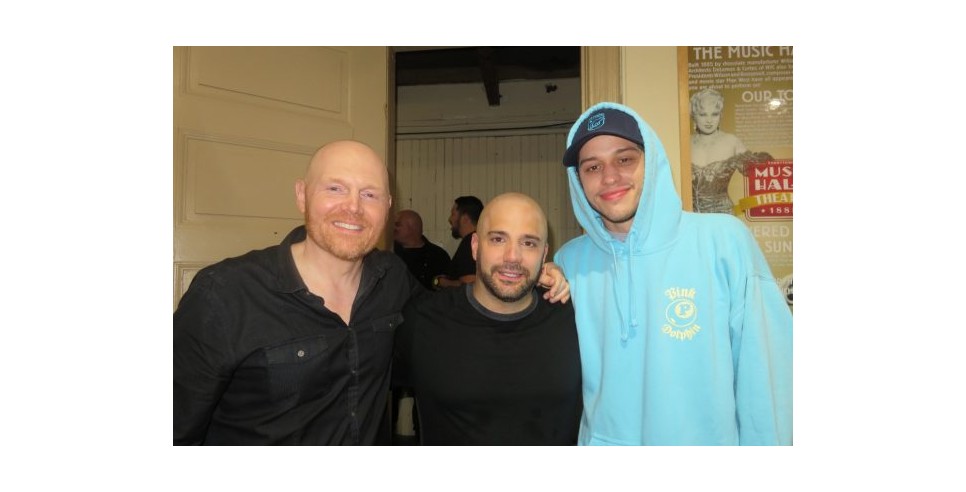 Paul Virzi was supposed to have taped his first TV special back in early May. Everything was already set up. He had been preparing and rehearsing it for awhile, and I was there on several occasions. I actually opened for him on two occasions when he ran the show, one at New York Comedy Club and the other at Levity Live in Nyack. But shortly before that May date, due to some uncomfortable behind-the-scenes stuff, he had to cancel the taping and tell everyone he had invited that he was going to have a new date sometime in the future. He was upset about that, but then something amazing happened.

Bill Burr and Pete Davidson heard about what happened and stepped up to make things right. Paul has been opening for Bill and traveling with him for quite awhile, and when Paul confided in me that both Bill and Pete would be producing, I knew it would all be okay and worth the wait, and it was. It all went down last night at the Tarrytown Music Hall in Westchester County, and I was there for the second show. As I got there, I was glad to see a line around the block and even more glad to find out I wouldn’t have to wait on it.

The first people I saw while walking from my car were Emilio Savone, owner of New York Comedy Club where Paul often performs, with comic Daniel Tirado. We hung out for a bit and then walked to the front of the theater where I ran into Paul’s manager Krystal Stark, from Stark White Entertainment, with Kerry Coddett and comic Tanael Joachim.

Then we went inside and signed in to get our passes and bracelet, and ran into Maureen Taran who goes back with Bill Burr to his earliest days. When it was time to be seated, Krystal escorted us inside to the three rows of reserved seats and we were joined by Bobby Kelly with Yannis Pappas, Steve Mazzilli from Gotham Comedy Club, and Sal Vulcano. James Mattern, one of the strongest hosts in the biz, opened the show and warmed up the audience and then intro’ed Bill Burr and Pete to the crowd. The crowd went wild. Bill and Pete came out together, thanked everyone for coming and riffed a bit with each other. They did some material, but it was obvious that they didn’t want to overshadow the man they were there to promote, Paul Virzi.

Paul came out to screams and huge applause and didn’t disappoint. It was a smooth hour with some new stuff I hadn’t heard thrown in and it was all great. There were several applause breaks– at least five that I counted. It ended with a standing ovation. Paul looked so thrilled.

After the show, we all went backstage and the first person I saw was Mike Berkowitz head of comedy at APA. Also, his APA compatriot, Andrew Russell. The room was packed with comics congratulating Paul on his great performance. Bill Burr greeted me by evaluating my outfit, telling me I looked like the road manager for The Beach Boys, and followed that up by saying that I was the only guy who could show up wearing a wife-beater in a non-threatening way! He admitted later that he likes to kid with me! Pete Davidson looked great and told me he was having a very relaxing summer. When I asked Bill what he had going on, he told me he was excited about his animated Netflix show “F Is for Family” getting a third season. Knowing about my book “ Laughing Legends,” he asked me about The Comic Strip and said he’d drop by to perform next time he’s in town. Then we all went over to a place called Barley on the Hudson for the after-party. They told me it was like a 10 minute walk, so I drove over with my date and Bill and everyone else walked and they beat me there. I even get lost using Waze. It was ridiculous.

The party was cool with food and drinks and at one point, we all gathered around a table to make a toast to Paul and then he made a toast to all those who came to support him. One of the guys had brought what must have been a very special drink that they used for the toast. It came in a small barrel. I who know nothing about drinking and I did not know what it was and was too embarrassed to ask since everyone else seemed to be very familiar with it. I heard words like “smoky” and “tasting the wood.” Maybe you people will know. All the comics I previously mentioned were there, plus Joe Bartnick who often opens for Lisa Lampanelli, and Chris Vaccarelli who I’ve performed with many times.

I asked Bill to make a statement about Paul and the evening, and when I took out my pad he took the opportunity to make fun of me again. He was like, “What are you Jimmy Olsen? In this age of technology, you write on a pad?” And I explained to him that when I did the book about The Comic Strip, I recorded every single interview and transcribed every single word by hand. It took me months of painstaking work and I wound up with 500 pages of material. I told him I never want to transcribe from a tape again if I can help it, so I write down what people say. That’s when he told Steve Mazzilli that I was one of the most beloved people in comedy and when he said that I took out my 7Plus iPhone and recorded what he said out of respect!

This is what he told me about Paul: “I was just so happy. It was so overdue. He was so ready and I was just so happy to see him go out there and kill it. I saw the fun he was having and I’m proud to be a small part of it, … and I’m so happy to be a friend of his. He’s really one of the great guys in this business. I think this is gonna be the first of many for him and that’s it. I love the guy.” Pete Davidson echoed that sentiment and said he was glad to see Paul get what he deserved!

When I left around 1:30 A.M., the party was still going strong. If I think of anything else, I’ll call or text you all!