We don’t know ourselves: A Personal History of Modern Ireland 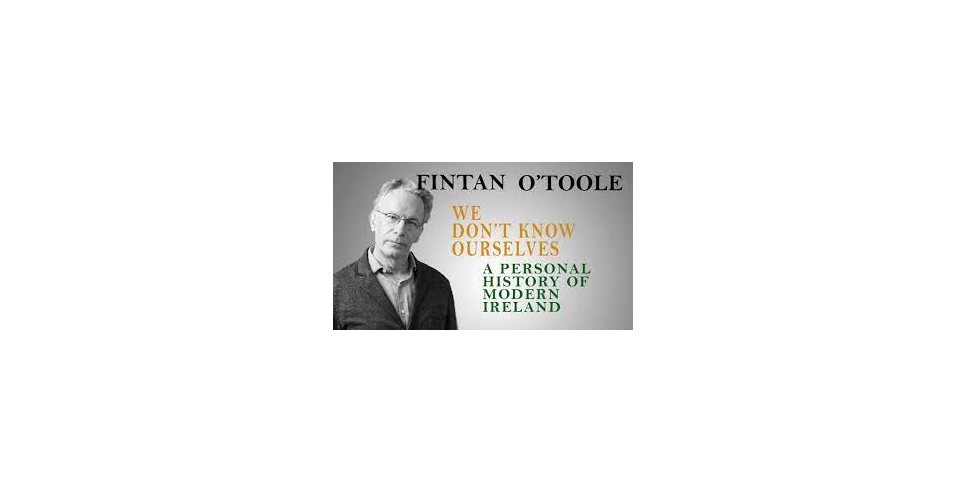 I am still gripped by Fintan O’Toole’s powerful rendering of the Irish—a culture that is as mystical as it is exasperating. His ability to insert poignant memories from his own life within the context of the larger whole of modern Irish history gives the book far richer meaning than if he only presented historical narrative without his own personal reflection. O’Toole grew up during the 1960s in Crumlin, a south side working class enclave suburb of Dublin that actually had running water. A writer of lesser talent than O’Toole would not have been able to seamlessly weave his own life within the frame of the big picture—those momentous events that brought Irish culture from the dark ages and into the Twenty-First Century.

Notable events include the launch of television in Ireland. The single national channel Telefis Eireann went on the air on New Year’s Eve of 1961. Keep in mind that Albania got its own television station before Ireland. Once television introduced Ireland to the profound influence of the west, the floodgates had opened, and there was no turning back.

The author quotes Dr. Noel Browne, the Irish politician who served as Minister for Health, as saying, “Television is…probably the most frighteningly powerful educational or propaganda media to come into the hands of man since the establishment of the printing press. Each one is us is frightened of it, whether Socialist, Liberal, Conservative, Labour, Catholic, Communist, or fascist, and rightly so.”

O’Toole does a brilliant job of showing The Catholic Church’s dominance in Ireland and the last ditch efforts the church made to keep the Irish people under its thumb. Education left in the hands of the Catholic Church was so inadequate that most boys dropped out of school by age fourteen. During the swinging 1960s, while most of the Western World explored civil rights and women’s liberation, the Catholic Church was busy banning Edna O’Brien’s masterpiece “The Country Girls” because it depicted young girls coming of age, exploring a healthy dose of their sexuality.

As one of the last strongholds of Catholicism, Ireland took a lot longer than other countries to come into the Twenty-First Century, but once it did, the culture emerged as one of the most progressive bastions in the world. The encroaching social mobility brought by the massive influx of technology, medical device and biotech companies resulted in sweeping legal reforms and cultural transformation. Is it any wonder that Ireland now has the most liberal gay marriage and abortion laws in the world, or that the new Ireland is young, buoyant and very prosperous?

The new holy trinity from the late 1990s—information technology, pharmaceuticals and medical devices, replaced the Father, Son and Holy Ghost (of the Catholic Church) and the ideological troika of land, nationality and religion. There is a clear and present danger whenever a nation is undergoing tremendous cultural and economic change. This same type of dynamic is now occurring in the United States. There is clash of opposing cultures between those who want to live in an America of the past, and those who know there is no going back, and we must press fast forward into the future.

The United States needs to take to heed by examining Ireland’s tumultuous years when the IRA and Protestant Loyalists were entrenched in heated warfare and bloodshed. The same type of domestic terrorism and opportunistic, destructive skirmishing has already erupted in the United States between The GOP and Democrats, or specifically between Ultra Conservatives and Woke Liberals and Anarchists and may very well escalate into a state of war.

O’Toole’s book is a masterpiece that leaves no stone unturned in his exploration of the Ireland of the past and the Ireland that exists today and is still in the process of becoming. The history of Ireland is recast and reimagined—this is a culture where literacy arrived and took hold in an oral culture, Christianity embedded itself into paganism, and the Vikings brought threats and opportunities such as cities and money. There was no Irish culture outside of this constant process of translation and fusion, of preserving things but also remaking them. The Irish culture itself has always been a shapeshifter.

The Leprechaun in me must add a final note: If the Irish were a craft cocktail recipe, the ingredients would include a wee bit of guilt mixed with a penchant for martyrdom, add a strong dose of playfulness, a sprinkle of mischief, a pinch of brilliance, one shot of stubbornness, two shots of pride, shake until thoroughly blended, pour and serve hot in the summer or cold in the winter.