“I believe visual literacy is part of a library’s mission.”

Miguel Llanos was standing outside the public library in Redmond, Washington. This was nearly twenty years ago. A member of the Redmond Library Board (the library then and now is a branch library of the King County Library System in Washington State), he was speaking to a clutch of Board members from other libraries around the KCLS system. I was one of them, and I’d been feeling a little out of my element.

Redmond, home to Microsoft and a host of other tech start-ups, is a woodsy community with well-manicured downtown streets. It’s located on the prosperous Eastside of King County.

I was from South King County. My community of Des Moines (some of the locals persist in pronouncing it “Dee Moynz”) is a small town that’s unfortunately situated directly under the flight path into the ninth busiest airport in the country, so any outdoor conversations are subjected to constant interruption by the roar of jets passing overhead.

That’s not all. Sometime way back in the misty depths of the 20th century, the City of Seattle, which is about a dozen miles north of Des Moines, sited not one, but two, of its garbage dumps nearby – far from their own city center. Those landfills are now brownfields identified as Superfund sites.

Des Moines also is unluckily located within the area that was contaminated with arsenic and lead by the toxic plume emitted for decades by the former Asarco smelter in Tacoma, the city to the south.

So we’re a humbler place than Redmond. Our circumstances are different. I’ve found myself saying more often than I’d like over the years, “I have a chip on both shoulders.”

But on that day nearly 20 years ago, I was intrigued by Llanos’ statement, and enthralled by the tour he gave us – uninterrupted by aircraft noise – of the Redmond Library Sculpture Garden. At the library entrance, Tony Angell’s imposing sculpture Wisdom Seekers showed four sleek bronze crows permanently perched on a tall, rugged granite boulder. Then we traipsed on a gravel path through a copse of birches. We paused to consider Dudley Carter’s Fawn and Bird, a piece carved from a single piece of Western Red Cedar. Other works in wood and bronze by artists Paula Rey Hawk Cowdrey and Dean Fredrickson also were displayed among the trees. There were some temporary sculpture installations, too. Llanos told us that the library had a partnership with the city to serve as a venue for an annual rotating art program.

But the tour wasn’t over yet. Next our guide invited us to raise our gaze to the roof, where we saw even more art! Permanently incorporated into the gutter system, four concrete gargoyles were fashioned in the likenesses of authors Saul Bellow, Raymond Carver, Toni Morrison and Joyce Carol Oates. Each figure peered over a concrete book into the garden below. Those were created by artist David Jacobson.

When we eventually went back inside, we viewed more Dudley Carter pieces in the lobby, as well as historical photographs that were on display courtesy of the Redmond Historical Society.

Llanos had a friendly, unassuming manner – but it was clear he was passionate about regarding the library as a cultural center, not just a book repository. And what he’d said about the mission of a library – it stuck with me.

When I left Redmond that day and headed back to Des Moines, I had plenty of time in the stop-and-go traffic of I-405 to think about what Llanos had shown us and to ponder the idea of “visual literacy.”

I’m old enough to remember when literacy simply meant the ability to read and write. It almost sounds quaint now, doesn’t it? The concept of “computer literacy” was first introduced in the 1970s, and by the turn of 21st century the term had become embedded in the vocabulary of the general public.

The notion of visual literacy, then, was a logical next step. With digital technology, visual media have become predominant tools in our personal communications, certainly. But while there is now an almost universal assurance of visual competency, I’m not so sure that visual literacy has kept up. Do we know how to analyze what we see? Beyond taking in the aesthetics of an image, do we also discern the cultural, ethical and contextual facets of what we are viewing? Or is the habitual scrolling going on around us – on every bus ride, in every bank line or break room, at the dinner table, the birthday party, and even at in-person spectacles like concerts and games – merely a visual opiate consisting of suggestive smirks, cute grandkids, selfies, memes, gifs and beautifully plated meals?

But I’m getting ahead of myself.

When I got back to Des Moines that day so many years ago, I cruised past my local library, the one where I served on the Board. I took in the parking lot and landscaping, the book drop, bike rack and trash receptacle.

But there was no public art.

And for the first time, I wondered why. Why did the Redmond Library have that rich trove of visual art, while the Des Moines Library had none? Did the powers that be think we didn’t deserve it? Did they think we wouldn’t appreciate it – or that we’d vandalize it? Weren’t we taxpayers in the same library system as the Redmond Library? Didn’t the library patrons in our beleaguered little town deserve the ages-old enchantment of carved cedar or the whimsical surprise of literary gargoyles just as much as the Microsoft millionaires did?

The heady excitement that I’d been feeling since the tour of the sculpture garden earlier that day gave way to a vinegary quest. It was time to address this inequity head-on.

To make a long story short: I prodded our Des Moines Library Board to inquire into this imbalance of investment in public art, but KCLS declined to provide our library with an exterior public art piece retroactively

Instead, a band of committed volunteers (and some very helpful local librarians and library staff) spent about four years of advocacy and grassroots fundraising to raise the money we thought we’d need to put out a request for proposals and commission a work of art for our library’s exterior.

There were challenges along the way, but we had a lot of fun reaching out to the community, too. What was less amusing was that once we were finally ready to put out a call to artists, some of the administrators at KCLS headquarters – the folks who hadn’t deigned to support our effort – stepped in with a last-minute expression of concern that our choice of project might not adhere to their high aesthetic standards.

We persevered, and in the end we commissioned sculptor Mark Twain Stevenson (his mom had been a librarian!) to create Turtle Island – Puget Sound, a six-foot-long piece in bronze and steel. Using satellite map information, Stevenson rendered a topographic map on the turtle’s carapace, depicting the land and waters of the Puget Sound region. The map was designed so that rainwater fills in the waterways – from the Sound to the Strait of Juan de Fuca and Hood Canal. Adults and children alike have the opportunity to “read” this map, identifying features like local rivers and bays, Mt. Rainier and Mt. Baker to the east and the Olympic Mountains to the west. If they look very closely, they can find a tiny bump of a turtle that represents Des Moines – thus locating their place in the larger landscape. 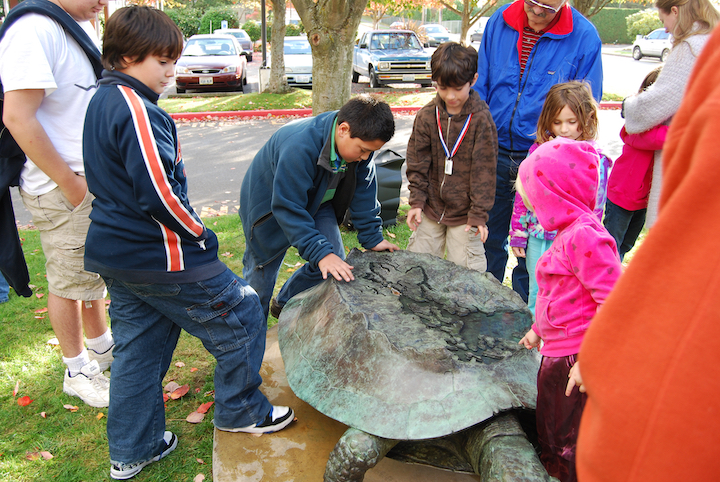 Twain pointed out that the concept of a turtle carrying the world on its back is held by a variety of cultures in their storytelling traditions, so this work of art exploits multiple opportunities to enhance visual literacy.

It’s so important for every community to have people who advocate for and promote public art that can be enjoyed by all. I’ve told Miguel Llanos several times over the years how impactful his words were to me – and ultimately, to my own local library.

I checked back in with Llanos recently to see if I could glean any other pearls of wisdom from him.

“I'm more convinced than ever that libraries can become the hubs that bring a community together,” he said. “Sure, many communities have a rec center, senior center, city hall/campus, but those can't bring in the cross section of people from all backgrounds that a library can. Books have long been what brings those folks in, but longer term I believe it's the programs, art/heritage displays, study spaces, reading spaces, and even children's play areas that will keep a community connected.”

He pointed out that the Redmond Library has always been the busiest public space in that city. So rather than having small, volunteer-run organizations like historical societies invest their resources and personnel in stand-alone museums, he thinks it makes sense to place art and heritage displays in a space like the library that guarantees visitors.

But he had one caveat: “These art/heritage displays can become like furniture, taken for granted by the public after the novelty wears off.”

Adopting a model that would rotate displays in and out on a regular basis is important for  continued community engagement.

Llanos said that while he’s moved away from the area and is no longer associated with a library Board, “I'm more convinced than ever that libraries, which have long championed reading literacy, will become champions and guardians of visual literacy as well -- sharing art and local heritage with their communities.

“I still think about libraries and their potential every time I pass by one.”