Notes from the Road: My Big Stump 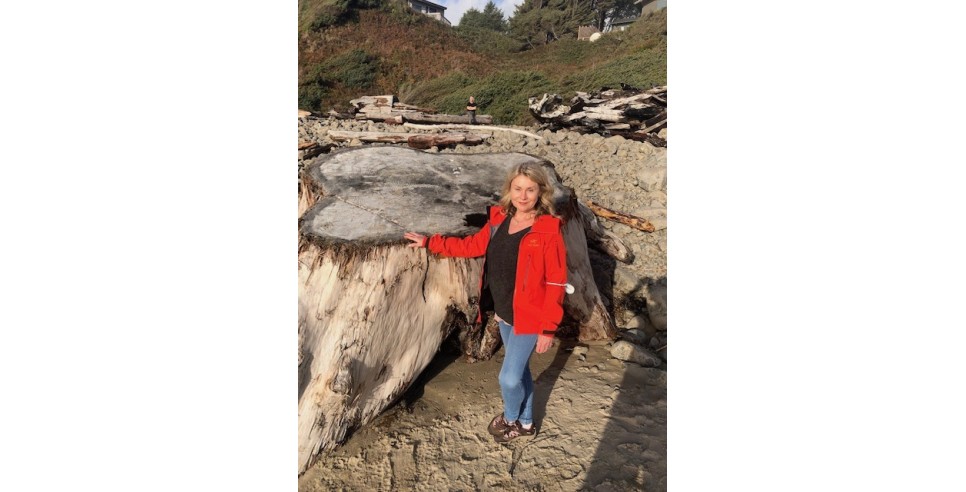 Notes from the Road: My Big Stump

A big windstorm blew a massive tree trunk onto the beach. Looks like the stump of a redwood to me. After a good rain falls, the tree’s wet wood takes on the reddish glow of a slow flame. When the full sun appears in a dry blue sky, the wood turns grey and withers, throwing off splinters like wiry strands in an old man’s beard. In case you didn’t know, I’m standing with sand in my shoes on the windswept Oregon coast.

Uprooted from the earth somewhere in this world, the tree is mine now. I imagine its life for a thousand years, long before anyone settled here. As far as I know, not many lived in this small ocean hamlet under the crowded, cloud-covered eye of Neahkahnie Mountain. Native people, the Clatsops, Nehalems and Tillamooks, dwelt here. There is no history book to help me to learn their song or to know if they would also be smitten with my big stump.

The stump came here, unbidden from an unseen coast as far away as Japan or as near as California. My stump could be from the ancient redwood forests close to Crescent City, where since 1933, thirty-two tsunamis have dragged innocent trees to a violent death by drowning. The Japanese 8.9 earthquake of 2011 cast a tsunami surge so large that it destroyed the entire harbor. Old-timers in Crescent City still talk about the terrible tsunami of1964 as the most destructive force to ever strike the Pacific Coast.

Death by drowning is as likely as death by fire. Stripped of its limbs, my stump shows no signs of having succumbed to a wildfire, but you can’t always tell everything that happened to a tree. I think trees know something about life that I don’t know. I’m sure they do. Their leaves flutter catching stippled flashes of light. Even when I don’t look at them directly, I can feel their leaves shuddering in the slightest breeze. This doesn’t mean that I always know what they are saying. I don’t know how to talk in tree.

I do know how to listen to a tree. The stump is not my first tree. I’ve had others. I once had a passion with a grove of Sumac trees, collecting their fiery red leaves from the ground when the first nip of winter stabbed the air. There is an old Seattle maple tree that I have loved from afar for as long as I can remember. This tree marked the heads of my children as they grew taller each year. The Maple’s leaves fanned to the sky in scarlet tipped clusters until only recently. This year’s heat dome caused her to shed her leaves, sallow and yellow, crumpling prematurely. Dead before they hit the ground. My maple looks like she is dying now.

For a long time, trees outlived humans by far. Hosting whole ecosystems of lichens, little trees and birds, their lives have been far more complex than anything I could have imagined. I speak of trees in the past because the world is changing and there might no longer be a good climate for trees to grow. All that remains of my stump tells me he was a mighty tree who had lived a long life. One day I’m going to count his rings. I don’t usually have the patience to do such a thing. But this tree deserves a proper send off. Love is where I will find you, old man tree.