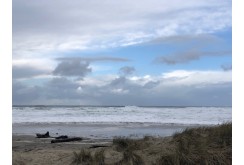 Waves sneak up to the shore from nowhere. Mountains of water advance, attacking like a marauding army. Churning angry white foam, the King Tide has arrived on the north coast of Oregon. Water levels rise higher and tides grow stronger. Some tides crest far higher than others. Swell after swell, rising and falling, an ache and a sigh, reeking of salty spray. Sneaker waves suddenly smash against the beach with a boom like thunder. The power of water washing over us can take us on an unwanted ride far out to sea. Sudden fierce currents sweep victims away. Never turn your back to the ocean.