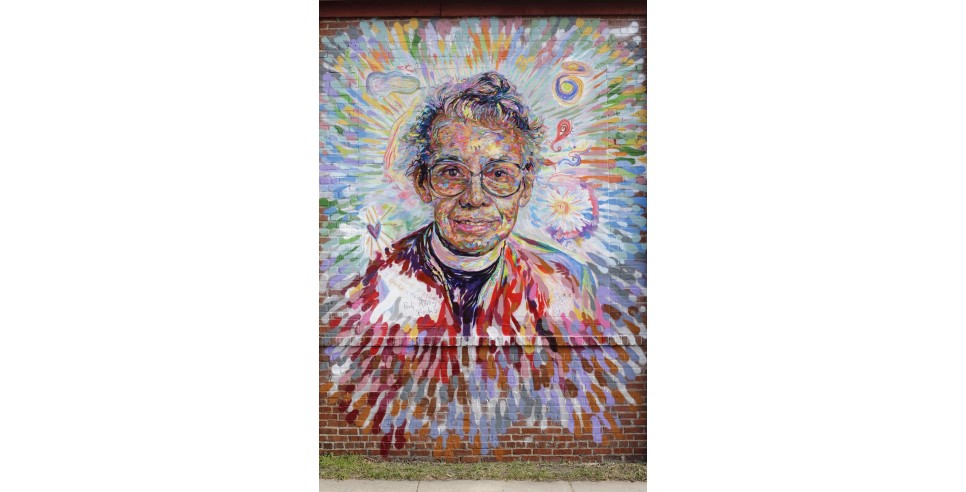 And yet, as writer Kathryn Schulz has said about her in a 2017 New Yorker profile, Murray’s lifelong fate was “to be both ahead of her time and behind the scenes.”

Born in 1910 and orphaned by the age of 12, Anna Pauline Murray was raised in Durham, North Carolina by her aunt and maternal grandparents in a mixed-race, multi-generational environment that prized education and conferred on her the family legacy of deep engagement in human rights issues.

Murray also grappled with gender identity issues from a young age.  She preferred boy’s clothes as a youngster, and used the phrase “he/she personality” to describe herself to her family.*

After graduating from high school at the age of 15, she headed for New York. She earned her bachelor’s degree from Hunter College and entered into a brief marriage that confirmed for her she did not fit that era’s conventional definition of a woman. So, she dove into reading up on “sexual deviance” and investigated gender affirming treatments and the possibility of taking male hormones. The medical solutions she sought were unavailable to her at that time, but she did switch from her feminine birth name of Anna Pauline to the more gender-neutral Pauli.

Murray moved to Harlem, became friends with Langston Hughes, and dreamed of being a writer – but the Great Depression forced her to consider alternatives.

Traveling back down South to visit family in 1940, Murray was arrested for refusing to sit in the back of a bus – 15 years before Rosa Parks’ more famous episode in Montgomery.

When she entered law school at Howard University as the only female student, Murray coined the term “Jane Crow” to describe the discrimination she encountered.

She was on hand in 1942 when James Farmer and Bayard Rustin formed Congress for Racial Equality – CORE – and joined them in employing nonviolent tactics to challenge racial discrimination.

After graduating at the top of her class from Howard, she went on to earn a Master of Laws degree from the University of California, writing her thesis on equal opportunity in employment.

Later she returned to the East Coast and compiled a book on “States’ Laws on Race and Color” that Thurgood Marshall, then the director of the NAACP’s legal department, called the bible for civil rights lawyers.

Further proof of her incisive intellect: a provocative paper she’d written back in law school that challenged Plessy v. Ferguson’s “separate but equal” doctrine was dug out of the files ten years later by one of her professors at Howard. He shared it with the team litigating against racial discrimination in the landmark Brown v. Board of Education case, and they used it as the basis for their argument.

In another case on a different matter, a young lawyer named Ruth Bader Ginsburg used an article Murray had written for a law review to argue that women, also, were covered by the Equal Protection Clause.

And in the 1960s, Murray’s outspoken opinion that women needed an advocacy organization resulted in Betty Friedan reaching out to her, and their co-founding of the powerhouse National Organization for Women.

In short, Murray lived her assertion that “one woman plus a typewriter equals a movement.”

Those are just some of Murray’s bona fides. But only recently is the intersectionality and enduring resonance of her work becoming fully appreciated.

Not only are scholars beginning to write entire books about her, but the simple frame house where she grew up and first absorbed those foundational values of equality and justice was named a National Treasure by the National Trust for Historic Preservation in 2015, and designated a National Historic Landmark by the National Park Service a year later.

This in itself is significant, because it’s calculated that of the 95,000 entries in the National Register of Historic Places, only 2 percent focus on the experience of Black Americans. In 2018, the National Trust launched an African American Cultural Heritage Action Fund to identify and help preserve more places where significant African American history has happened.

Today the Pauli Murray Center for History and Social Justice is working to rehabilitate Murray’s childhood home as an educational site that will help visitors connect history to contemporary human rights issues.

Barbara Lau, director of the Center, notes that Murray’s family history provides a rich basis for their work.

“These people had a commitment to the ideal of democracy and believed that democracy would continue to evolve,” she said in a recent phone interview.

In her final years, Murray embraced a new endeavor. She left the law behind and studied to become an Episcopal priest. In 1977, she was the first African American woman to be ordained in the church. Although she lived in New York City, Murray returned to North Carolina to administer her first Eucharist – at the chapel where her grandmother, born into enslavement, had been baptized a century before.

Over her own lifetime, Pauli Murray was an activist for civil rights and women’s rights, an author and poet, a legal scholar, an LGBTQ community member, and an Episcopal priest. She worked ceaselessly to break down binary categories and barriers to opportunity, insisting on a world where she – and anyone else – could show up, be counted, and reach their potential.

The Center that now bears her name intends to embrace and further this open-hearted attitude, encouraging present and future generations to continue Pauli’s work against discriminatory practices.

“Pauli really understood this notion of ‘becoming’ throughout her life,” Lau said. “There’s this idea that with the right push, the right advocacy, that democracy would continue to become more inclusive, more perfect, more powerful.
“It would embrace the agency of everybody.”

* Note: After experimenting with ‘he/she’ terminology early on, Murray used the pronoun ‘she’ in her later writings. The gender-neutral term ‘they’ did not come into common usage until some time after Murray died in 1985. See the discussion of “Pronouns and Pauli Murray” at https://www.paulimurraycenter.com/who-is-pauli