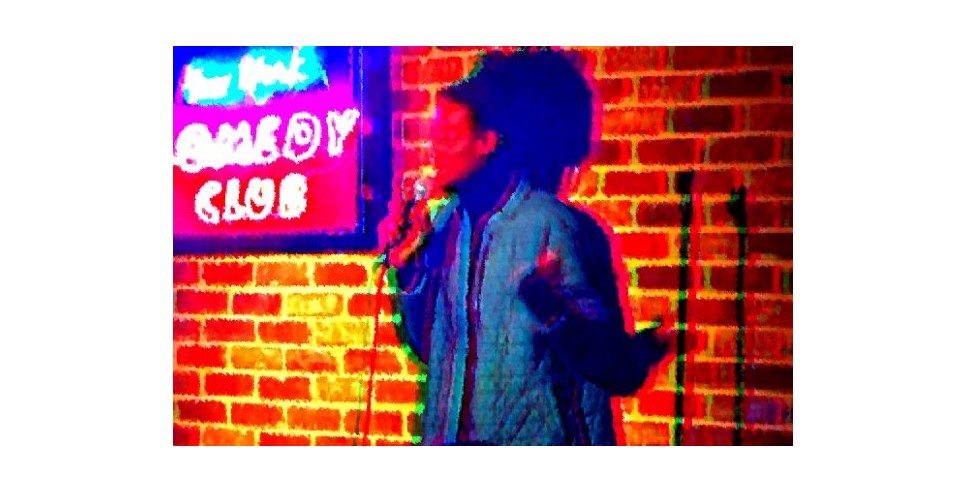 Ron Bennington sat in with Anthony Cumia this week while Artie Lange is out and they were joined by Owen Benjamin one of the most unique acts in the business, and not just because he’s 6’7” tall. Aside from his comedy skills, his musical skills are to be admired as well. He usually comes on stage with a keyboard and does a bunch of fun original songs. He had some very strong opinions, which he voiced comfortably, … maybe also because he’s 6’7”, … and his political stance was often in line with Anthony’s and very often opposite from Ron’s, who basically told everyone to just relax, and chill. Ron stays cool no matter what. It was a great show.

As the weather got colder this week, it was harder and more uncomfortable to get around to the venues, but I did catch up with some cool peeps at New York Comedy Club where there’s usually something fun happening at all times. As cold as it was, as I approached Carly Aquilino was outside alone catching a smoke. We talked as long as I could before I started shivering and went inside. She’s going back to LA around the end of the month, and hopefully will be back on SafeWord, an MTV show with a mostly New York cast of comics like Leonard Ouzts, Ricky Velez, Akaash Singh, (I almost forgot that extra “a”, which would have made it pronounced exactly the same!), and Matt Pavich who definitely only needs one “a”!

Inside I ran into Ayanna Dookie wearing the best, and most fun faux fur coat I had ever seen. It looked like a coat that somebody like Elton John would wear, … or maybe that I would wear! She and Mike Brown have a fairly new show called King Hippo and they do it out of The Mockingbird every Thursday, a place on Avenue B, where they’ve never seen a coat like she was wearing. So far they’ve had Roy Wood Jr., Tone Bell and Dean Edwards drop by to perform. I made a point of asking and she said that white comics can do it too! (LOL) The name King Hippo comes from a Nintendo game having to do with Mike Tyson called Punchout. Just in case you were wondering.

The green room was insane with so many comics hanging out and not only to get out of the cold. It was Brendan Sagalow, Jason Salmon, Robby Slowik, Bronston Jones, Zainab Johnson, Paul Virzi, Mike Cannon who had some exciting news to share, and someone I was especially excited to see, my buddy Rell Battle from the CBS hit Superior Donuts. Mike disclosed in a very humble manner that he was recently chosen as the Best Comedian In The World Ever Of All Time. In my haste I forgot to ask him who bequeathed that honor upon him, but I’m sure it was someone notable, like one of the open mic’ers from the club.

While all this insanity was going on somehow Rell Battle was able to maintain a phone conversation on his cell, while pacing the room. After his set we caught up. With the success of Superior Donuts, he lives in Hollywood now. They’re on hiatus but they have 8 more episodes to shoot. He said that they had a Christmas party on the set and that Judd Hirsch is an excellent dancer. In his words, Judd can “drop it low to booty trap music”! I’m guessing that’s urban vernacular! Rell is incredibly humble and said he was “just a lowly stand-up comic who got lucky.” He says when he’s on the set he looks at Judd and thinks, “ What the fuck am I doing here?” He also said he learns a lot from Judd who is very honest with his comments on your performance, and will always tell you the truth. So when Rell told me he was going on tour himself this coming summer and I asked him the name of his tour he busted out laughing, and said at his level tours don’t have names. It’s not like Chris Rock’s Total Black Out Tour. He’s just gonna be traveling around and doing sets. They also did a Superior Donuts tour this past November and when they got to New York Robby Slowik hosted the show at Carolines. They also did Chicago, Philly, D.C. and LA and it was Rell, Jermaine Fowler the star and Executive Producer of the show, David Koechner, and Maz Jobrani.

Since there were so many comics in the room now living in LA a spirited convo broke out on the merits of being in NY or LA and it was interesting to hear their takes. It seems there’s more spots in NY but the money is better in LA. That was the general consensus. Then Rell asked me what I was up to, and when I told him about my new book he was like, “ Another one? You got more books than anyone I know. You’re like the Lil Wayne of comedy!” And Zainab Johnson waited patiently to close the show. Never knew she’s the 5th of 13 kids. That’s a lot of kids. She left to go back to LA yesterday and she has hair now too! I asked her how it feels to have hair and she said, “It feels great especially in this cold ass weather!” More urban vernacular!

Eric Neumann has worked very hard to come to where he is now. He told me he writes every day and it shows. He’s already had his breakout night at Carolines and is planning to record his first album in March at The Comic Strip which is very appropriate since he spent so much time there honing his talent. It’s going to be called Nervous Lover and if it contains any of the material I heard him do it’s going to be great. And thank G-d he got rid of that Civil War beard, which I think he gave to his comedy bro Marc Gerber.

AMarie Castillo celebrated ten years in this crazy business by having a celebration show at West Side Comedy Club, and it was a packed room. So many of her friends and peeps from Soul Cycle came out to support her on a frigid cold night. And I came because that’s what I do. I come out to support. She had a variety of openers including a long set by her protege James Jarrott, an openly gay comic, (which he mentions a lot), who has the uncanny ability to rattle off material for half an hour without seemingly even stopping to take a breath. It’s like a non-stop stream of consciousness seen only by the likes of a Robin Williams. It’s very intense and I have no idea how he does it but maybe his coaching at Soul Cycle gives him the energy which he has in abundance. AMarie herself came up and rather than do her usual stand-up she told very personal stories about her life. She never started out to become a comedian. She started out barking outside The Village Lantern, trying to get people to come in and see the free shows, and then started producing comedy shows. Next thing she knew she found herself on stage, and now it’s ten years later. To keep her going she’s had 15 jobs within the ten years of being in New York. Comics do what they have to do to survive.

Walker Hays was there and told me she’s headed to Australia to perform in the next few months. I asked her how it came about and she told me a great story. An Australian promoter saw her perform at a Roast Battle. He originally met her at The Cellar and came to see her perform. Now she’s going there for 10 days to perform all over Australia and she plans to spend two days performing in London as well. Corinne Fisher wasn’t able to attend but sent her beautiful flowers, and lots of comics also came to support. One great thing was having Lori Sommer close the show. Lori is also one of the managers of West Side Comedy Club along with Gina Savage and Lori brought it all home.

With the temperature hovering at a balmy 9 degrees that’s all I got for you this week. but tonight I’ll be attending the Gotham Comedy holiday party and the Stand Up New York holiday party plus trying to squeeze in a visit to The Impractical Jokers who will be at Carolines, so I can personally thank Sal Vulcano for Tweeting all on his own about my book on Happiness, “Healing Your Heart By Changing Yout Mind.”

Hope you all had a very Happy New Year and wishing you all the best for the coming year and beyond!