Parties All Around Us! 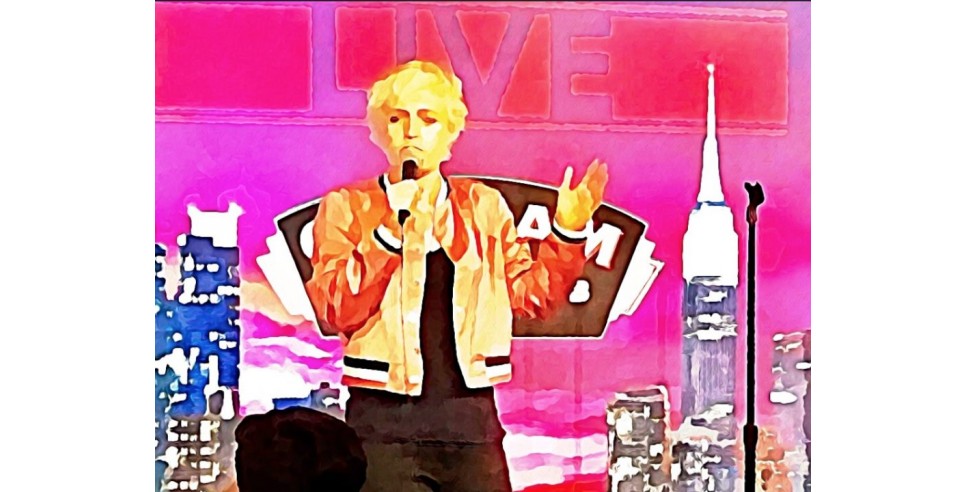 It was the week of the opening party for the new New York Comedy Club East 4th Street edition, the old Eastville Comedy Club and true to form Emilio Savone changed the entire energy of the space. In a good way! Needless to say, but I’ll say it anyway, the place was packed with comics, and as I approached a lot of them were out in the street. It looked like a comedy youth gang, but not at all scary! Krystyna Hutchinson was there and told me that she and Corinne Fisher had six sold out shows each in Helium in Philly and the D.C. Improv. They call it their Bridget Bishop Tour named after the first woman to be executed in the Salem Witch Trials. Those people would have had a ball with Krystyna and Corinne. The fire would still be burning! She told me they have a new thing now at the end of the show they ask audience members to tell them the worst thing they ever did that would have gotten them executed.

Jacob Williams from MTV’s Wild ’N Out was there and told me that Season 12 just started airing. It was filmed over the summer and it’s his 8th season. He too is on tour doing clubs and colleges in the Northeast in states like Washington, D.C., Pennsylvania and Maryland and he says they draw a lot of fans of Wild ’N Out. One week ago he got to perform in a Wild ’N Out live show at Barclays, which he said was the biggest crowd he had ever performed for. He said he did a cameo and a lot of improv.

I went to Gotham for an All-Star Show and ran into Daniel Tirado who told me that on he will be featured on truTV’s Laff Mobb’s Laff Tracks this month, and not only will he be featured but he had the joke of the night. And just to prove it to me he brought the producer of the show along with him, Paul Bourdett, who vouched for everything he told me! Paul said it was a joke about text messaging. Plus Daniel got to act in his own sketch. Paul said he’s a big fan of what we do at The Interrobang. I have lots of jokes about text messaging. Maybe I could get on that show too! I recently saw Daniel up at Just for Laughs where he did shows in both French and English which is a major accomplishment and a big surprise to me, since I didn’t know he spoke English.

Emma Willmann was there and told me she’ll be on the next season of Crazy Ex-Girlfriend on the CW network, which is their 4th and final season. She’s currently prepping her set for Colbert, and her Netflix 15 special is out now, as is Janelle James’ special. They taped in Atlanta for anyone who’s curious about things like that! I complimented her on her hair which looked great and she told me she just dyed it platinum. I wanna do that too, like Pete Davidson did, and she gave me the info on where to go.

Yamaneika modeled her multi-colored hair, and Charles McBee was the host. He’s writing for MTV for the new version of TRL, which is a talk show hosted by my man Sway Calloway. It’s a talk show format that’s on Monday through Friday at 8 A.M. but gets repeated throughout the day. I asked Charles how he got hooked up with MTV and he said he had been writing for different MTV shows for a while, and for the VMA’s, as well as shows like Fear Factor.

And Louis Katz was there in shorts and a baseball cap and I swear I didn’t recognize him, but I thought he was really funny and some guy from out of town, so I asked someone who he was and when they told me Louis Katz I couldn’t believe it. I totally didn’t recognize him. He’s got a new album coming out in October from 800 Pound Gorilla with the best name, KatzKills, which I’m assuming is a play on Catskills, the home of comedy for many, many years. He’s also got a monthly show out in LA on the rooftop of the Ace Hotel, on which he says he books fewer comics to do longer sets, and hopefully bigger names, like two he’s already had, Maria Bamford and Kyle Kinane.

I found myself back at Gotham for another All Star show and ran into Mike Vecchione who told me his new album called “The Worst Kind of Thoughtful” hit #3 on iTunes. He taped it at Governor’s which he said is close to home for him and holds a special place in his comedic heart for giving him lots of stage time. The album’s got 35 tracks and is 82 minutes long. I happen to think that Mike is one of the best writers on the scene. Raise your hand if you agree. Larry Beyah was the host and was really on his A-game. There are very few people who bring that level of energy to the stage. He’s a wild man and kept calling the Labor Day weekend the Memorial Day weekend. We all wished it was. How could it be September already? Leah Bonnema opened the show very strong and tod me she’s on Emily’s List Creative Council along with Chelsea Handler, Lea Delaria and Iliza Shlesinger to promote women running for office at all levels of government. They’re having a benefit night at Gotham with two shows at the end of September.

I popped over to Stand Up NY to welcome Jon Borromeo back to town from D.C. and caught Dan Carney, Kevin Hurley and Zach Andresen’s new late midnight show Super Giant.

And I finished my comedy week off at Piper Berg’s first birthday party along with a bunch of comics. It was particularly nice that her parents came, Aaron Berg and Christine Meehan-Berg, dressed in Hawaiian attire. Aaron wore a grass skirt to go with his tattoos and muscles and showed his prowess at the barbecue. In between the festivities, I got some of the comics to tell me what was going on for them.

Aaron will be headlining a theatre in Vancouver which holds around 250 people and the owner asked him if Isis Phaggott could open for him. Aaron who’s tight with Isis’ people said he’d arrange it. I asked him if he was getting paid double and he said that he was getting paid in US dollars, but that Isis agreed to be paid in halal goat meat. Casey Balsham and Robbie Slowik will be touring Holland and England this coming December. Robbie told me he grew up in England until he was 7. That’s why he’s such a classy guy. (My words not his!) Geno Bisconte is in the new season of the NFL Top Ten, and I hope I said it correctly because what I know about sports you could get in your eye and it wouldn’t hurt! And Geno’s Picks season 11 premieres Thursday on the web.

Katie Hannigan did Colbert last month and is now working on new material, and Remy Kassimir told me she was on the Netflix show “Explained” talking about the female orgasm. It was narrated by Rachel Bloom and she said that her downloads on her podcast “How Cum?” really spiked after her appearance. And she proved it by showing me on her cell phone. It was a great party which Piper will never remember, … fortunately because when they brought out her cake with the one candle she accidentally put out the flame with her finger. I guarantee she may not remember her party, but she’ll never touch anything hot again!

Comedy Juice was poppin’ this week which should really be a surprise to no one, and Mark Normand popped in and told me he recently was victorious over Kurt Metzger on Roast Battle, and happened to mention that just that afternoon he was watching an interview I did with Bill Burr on my Comedy Matters TV channel and really enjoyed it. That was very nice!

I hadn’t seen Kevin Iso in a minute so it was cool that he came through, and he’ll be doing the Big Sky Festival in Billings, Montana for the first time. He said he auditioned at New York Comedy Club and totally forgot all about it until he got the call last week that he was accepted. Later this month he’ll be at the LA Film Festival with Dan Perlman at a showing of their web series Flatbush Misdemeanors, which will also be showing at the Baltimore International Black Film Festival. Dan will be showing his part at the Baltimore International White Film Festival of which trust me, … there is no such thing.

Maryssa Smith’s Fashionably Funny show at Broadway Comedy Club was just that, and she had a nice sized crowd. Besides her podcast Big Talk and Brewskies she’s got another podcast now that she does with Dave Sirus called Blamestorming, a politically themed show which she does out of the Gotham Podcast Studio down in the financial district.

Anyway, hope you all had a great Labor Day and with that … I’m OUT!!!