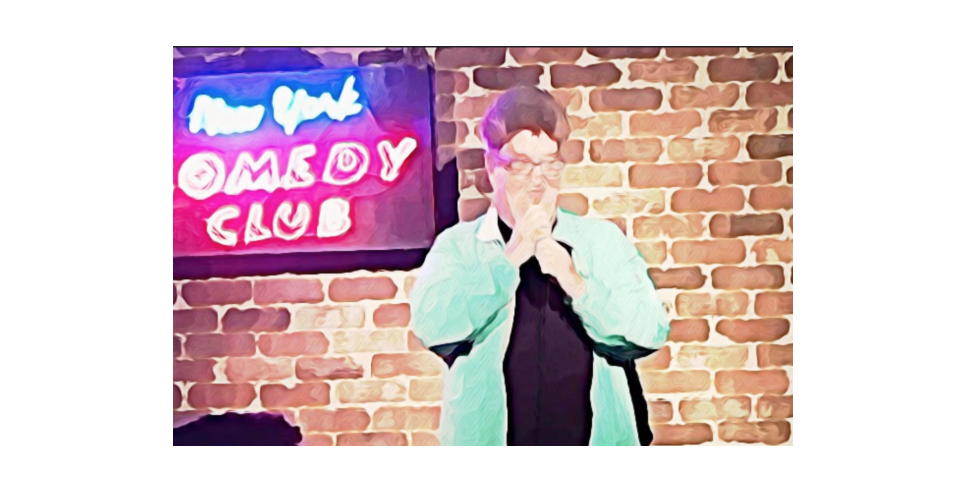 Mike Bochetti taped his first special at New York Comedy Club and he had Ryan Dacalos and Madison Malloy open for him. Mike has evolved a lot over all the years I know him, and he doesn’t do that “stage shuffle” anymore that he used to do back in the day, when he’d do jokes like, “When I used to be a cop!” He never even had to finish the sentence. Just that kind of set-up was enough for him. Those who know him get the joke. What he does is actually very difficult because he has so many jokes and most of them are not connected to any particular premise, which means much more memorization, and it all went very smoothly proving his mental abilities and disproving things he addressed that had been said about him in the past. What he does that is very endearing is that he thanks the audience in between most jokes, especially the ones that don’t land the way he expected them to, which aren’t many at all considering the amount of jokes he tells. The coolest thing was that his Mom was sitting right in front laughing at every self-deprecating joke he made. The album was recorded by Aaron Hodge’s You Lucky Dog Productions, and Mike hasn’t decided on a title yet.

It was truly a week for jumping around and I did. Backstage in the green room at New York Comedy Club, I found Matt Richards who’s in from LA till July and planning to do The Draft House in D.C. coming up soon. And Mike Feeney, Brendan Sagalow and Mike Cannon were just hanging out cause the club is like their second home. Brendan said the Amy Schumer thing is dying down but his social media presence increased dramatically because of it, and he’ll be headlining Stand Up New York in the middle of June. Then they are all going out to LA together. So watch out L.A.You’ve been warned!!!

Stand-Up New York was packed with female talent when I stopped by. Marion Grodin was there hosting the show and had just taped her first special at Gotham a few days before. It’s called “ I Just Wanna Lie Down” which is a thought I can definitely relate to. It’s all I’ve ever wanted to do. She told me she’s planning on shopping it to radio, but then I reminded her that it’s also video and she had to make new plans! Marion was hanging with Yamaneika who only needs the one name because there is no other. Either you know her or you don’t! No one says “Yamaneika who?” And Yamaneika will be seen on the new Netflix comedy special series called “The Degenerates” along with Big Jay Oakerson, Joey Diaz, Liza Treyger, Christina P. and one more that hasn’t been picked yet. And she’s in three episodes of Laff Mobb’s Laff Tracks!

And then Alia Janine came along and she makes no bones about talking about her past as an ex-porn star, who now hosts a show called Raunch at Stand-Up. It’s brand new and the next one will be during the third week in June. It will be a midnight show and she’ll be co-hosting with Nick Z a comic who also DJ’s and there will be an after party as well which hopefully will become a thing these days. I think that people who go to a comedy show and have some drinks would like to stay and party afterwards if they had the opportunity. Especially if they get to mingle with the comics. Her next show will feature Aaron Berg, Chanel Ali, Myka Fox, Carla Oakerson, Luis J. Gomez and Dave Temple. Should be a fun show and I will be there to let you know. Alia will also be graduating in June with a degree in Psychology! That will come in very handy when producing shows.

I went out to QED in Astoria to catch Tracey Carnazzo’s show and hang with her for a bit. Tracey just got back from the first annual Oak City Comedy Festival in Raleigh, North Carolina, where she did a show at what she called the biggest comedy club in Raleigh, Goodnight’s Comedy Club. And while she was out there she also did Kenny Warren’s “Comics Cutting Comics” live show in which he used all local comics besides her. Tracey is the co-host of the Teen Mom Trash Talk podcast, which is a recap of the MTV show Teen Mom. She does it with two other podcasters, non-comedians Noelle Winters and Gabrielle Fragala from her own in-home studio. It’s not affiliated with MTV but she says they’re aware of it, because it makes the iTunes chart every week. She was also on the TRL Teen Mom after show, and she is a busy woman!

As I was sitting there waiting to go on, who walks in but Anthony Devito and Greg Stone. I had no idea they were friends since high school and now are both writing on Michelle Wolf’s new show “The Break with Michelle Wolf” which was actually debuting the night I saw them and they were out performing. Anthony said he got the show as the result of sending in a packet, and about a week or so later found out he got the gig. He had to leave his former MSG show “People Talking Sports and Other Stuff” in order to do this show. They do The Break from the old Daily Show studios on 54th and 10th. So these two old friends share an office and they say they are having a ball working together. Greg said that Michelle is so easy to work with and that he and Anthony have a lot of fun bouncing jokes off each other. Anthony is another one who started out on my late night show at The Comic Strip. Just about all of them have gone on to do good stuff.

Over at West Side Comedy Club I ran into Ian Fidance who was hosting. Ian will be doing A Week at The Creek in June for his second time and will be doing an hour and having a few friends open for him. Who those friends will be is undecided at this time. And he’s also now a regular every Thursday on SiriusXM with Nikki Glaser on her new show “You Up with Nikki Glaser”

Jamie Roberts’ Sunday Night Live show has been going strong at Broadway Comedy Club for many years and is as strong as ever. He really packs them in and always gets a good line-up. Jamie hosts and the night I stopped by it was Damien Lemon host of truTV’s Comedy Knockout, whose face you can see on posters all over the subway, Kenny Ortega who books Yonkers Comedy Club, and Jason Scoop just back from L.A. and Vegas where he did The Laugh Factory in both towns. He also did Chocolate Sundays in LA which is an all Black show but since he’s kind of ethnically ambiguous I guess no one noticed! He also did the new Comedy Cellar room in Vegas while he was out there for 8 days. He went out with his manager Jason Steinberg of Steinberg Talent who was there for the Managers Conference, and Jason (Scoop) confided in me that he’s thinking of moving to L.A. More on that later!

One of the things I love about writing this column is that I get to introduce new people on the comedy scene and this week it’s Mehul Patel a comic/producer whose goal is to produce high-end shows in places like Gospel which is the one I attended. Gospel is a very hip space on the Lower East Side, very elegant, and really cool and laid back. It’s like a super-chill lounge with sofas and theatre style seating facing the stage, and a bar where you can get drinks during the show. The backstage area where the comics hang out by going through the kitchen is also really nice and was set up with food and drinks for the people on the show and their friends. I got there right after the show had started and was guided to a seat just in time to see Elon Altman killing it with some very sharp material. Mehul produces under the name Rebel Soul, and he likes to have an after-party after his show which works well when you’re doing an upscale show in a trendy area. People like to hang, and meet the comics and enjoy a cool D.J. Mehul explained, “We try to incorporate a charity message to start, as it’s our belief that comedy is engendering activism during a unique period we are all living through.” So far it’s a monthly show at Gospel and the first month he incorporated a wandering magician into the mix, during the cocktail hour before the show.

Also in April, they produced the comedy segment at a fundraiser for Sheba Medical Center in Israel, at Hotel Rivington as well as Castle Hall Performance Hall in Providence, RI, a converted theatre which is now a performance space, with donations going to Chef’s Feeding Kids. He would like to create “pop-up” shows at different venues to raise money for charities, and they are working on a mobile app so people can connect better to their planned pop-up shows. Mehul himself has only been performing for less than two years, so all this is a very ambitious undertaking for him.

Another new name for me is Anthony Crescenzo, from Teenage Mutant Ninja Turtles 2 and The Wendy Williams Show, who starting this past March, produces a monthly Sunday night show out in Springfield, New Jersey at Scotty’s Pub and Comedy Cove, a place I had always heard about and wanted to perform in, so I jumped at the opportunity. Despite the fact that it was a holiday weekend, and rainy besides, he had a good sized crowd. He described himself as “the king of bad weather shows,” and said he once had a sold out show during a 60 inch storm. I didn’t know there was such a thing, but maybe he ran a club in Antarctica. His quote was “If I produce a show the weather will suck!” But he added, “This might be the first time crap weather has worked in my favor. If its raining, you ain’t going down the shore.” He used to produce shows at Eastville Comedy Club, and also co-produced a series of club showcases called The Advanced Warning Tour, but this is the first show he produces all on his own, due to the support he gets from Comedy Cove honcho Gene Nagel. It’s a really cool place with a big restaurant downstairs and the showroom upstairs. They also tape the shows, thanks to a comic named Johnny Hollywood, so that performers can have a tape to use for bookings, and the audience was great and very supportive. I hope to go back.

And with that, … I’m not only UP, I’m OUT!!! Hope you all had a GREAT Memorial Day weekend.