Carousels: the whirl of the holidays 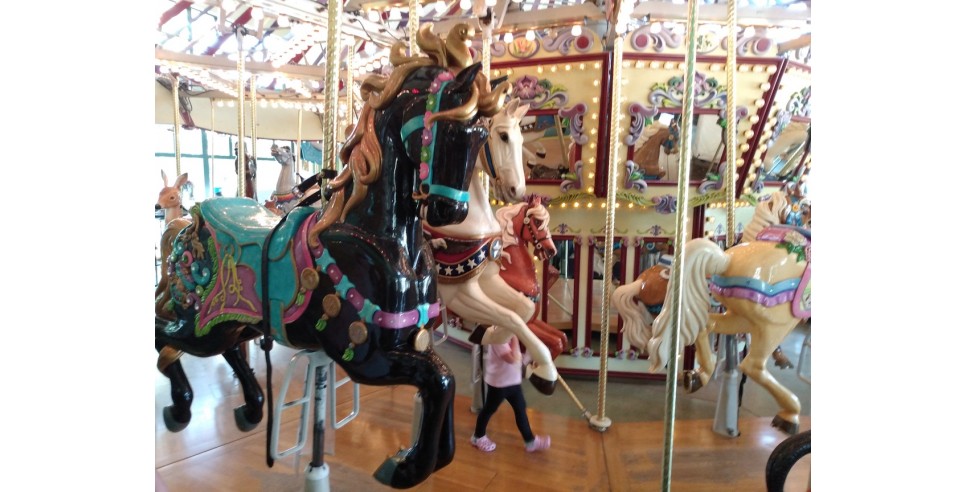 When Joni Mitchell recorded “The Circle Game” back in 1966, her carousel lyrics conveyed a pensive slant on the passage of time. In fact, that was also a rather doleful time for carousels, which had enjoyed their greatest heyday much earlier – in the first quarter of the 20th century. But the Great Depression signaled the beginning of a decades-long decline for those old-fashioned entertainments. Even when amusement parks came roaring back after World War II as corporate money-makers, the focus was on faster-paced rides offering more thrills and chills – not the placid merry-go-round.

More recently, however, carousels have begun to see a comeback. They’re popping up in communities large and small, and as we reflect on the major ups and downs that we’ve all faced over the past couple of years, perhaps this is a good moment to turn our attention at least briefly to the promising outlook offered by this classic leisure-time diversion.

If you look at the Carousel Census Map offered up by the National Carousel Association, you’ll note that currently there are hundreds of carousels in operation across the United States. Let’s single out two on opposite coasts to dig into their stories.

In 1984, Youngstown, Ohio, suffered a devastating loss when a spark from a welder’s torch accidentally set off a blaze that spread throughout Idora Park, a beloved pleasure ground for the region. The inferno consumed concession booths and rides along the midway. When the owners realized they were going to be unable to recover after the fire, they auctioned off the miscellaneous features that remained – this included the carousel, which had been built for the park in 1922 by the Philadelphia Toboggan Company.

Singed, but still largely intact, the merry-go-round was in danger of being parted out – but then a New York couple stepped forward and committed to making the highest bid for each of the carousel elements as they came up at auction. All told, David and Jane Walentas ended up spending $385,000 to keep the carousel complete. But that was just the beginning of their investment in the carousel project.

At the time, David Walentas was a self-made entrepreneur and real estate developer who was working to clean up and repurpose the industrial DUMBO (Down Under the Manhattan Bridge Overpass) area of Brooklyn for offices, residences, and park space. His wife, Jane Walentas, worked for a time as an executive at Estée Lauder. But she’d also earned her MFA in Fine Arts and was involved in arts philanthropy.

The rescue of the carousel and its removal to the DUMBO became a hands-on pet project for Jane, who dedicated the next quarter of a century to the carousel’s meticulous restoration.

In order to identify the original color scheme, Jane was personally involved in delicately chipping down through the layers of paint that had been applied to the carousel’s 48 carved horses over six decades of heavy use at Idora Park. The flooring of the carousel, too, was layered with paint – battleship gray – which Jane also stripped down to find the natural wood grain.

But the restoration of the carousel was only one of the many steps involved in bringing this carousel fully back to life. The Walentas spent years navigating complicated permitting requirements in order to install the carousel in Brooklyn Bridge Park, on the banks of the East River. Then to house the carousel and protect it from the elements, they commissioned Pritzker Prize-winning French architect Jean Nouvel to design an elegant plexiglass pavilion with retractable doors – that was a $9 million expenditure.

In 2011, the carousel finally opened in its new venue. Fully restored, the carved horses were exquisitely detailed with the finest paints available, and further embellished with gold, silver, and copper leaf, glass “jewels” and mirrors. Now the herd prances proudly along the carousel’s gleaming, varnished floor of century-old planks of Ponderosa pine.

The carousel has been featured in video segments by Martha Stewart, “Glee” and “CBS News Sunday Morning.” But more importantly, it has hosted new generations of riders – children, parents, grandparents and sweethearts.

Jane Walentas died two years ago, but her memory lives on in this sparkling gift for all to enjoy. This year, 2022, marks a century since this magnificent ride – now called Jane’s Carousel – first went into operation.

The carousel is open year-round. To learn more, visit janescarousel.com – and make sure to click on the link that connects you to Jane’s Memory Book, which includes decades’ worth of sweet memories shared by folks who have ridden the carousel – whether in Youngstown, or in Brooklyn.

Twenty-five hundred miles across the country, another carousel twirls on another riverbank. This one, too, was championed by a woman who wanted to see something special come into her community.

A longtime Salem, Oregon, resident with a bent for community activism, Hazel Patton had been inspired by something she’d seen during a visit to Montana. In Missoula, Hazel had taken a ride on a carousel that featured newly carved and freshly hand-painted horses that were created by community members to “gallop” atop a restored antique carousel frame and motor.

Hazel was enchanted by the ride and inspired by the community effort. If Missoula could do that, Hazel figured that her town – the capital city of Oregon – could pull off a similar project.

Without further ado, she returned to Salem and convinced city planners, community partners and a phalanx of local citizens to jump into the project. A crew of enthusiastic volunteers set about designing, carving, and painting not only 40-some steeds but also additional features that reflect a uniquely Pacific Northwest aesthetic. Instead of including the conventional carousel chariots, for example, this carousel hosts a chuckwagon and a covered wagon as a nod to the area’s historical significance as the destined territory at the end of the Oregon Trail. And on the decorative rounding boards that encircle the top of the carousel – the panels include artful renderings of the state flower (Oregon grape blossom), the modernistic Art Deco cupola of the Oregon State Capitol building, and clusters of red cherries, which are a reference to Salem’s nickname as The Cherry City.

In 2001, just five years after Hazel had approached her community with the spark of an idea and a gleam in her eye, the Salem Riverfront Carousel had become a reality and opened to the public.

Ensconced in a handsomely designed brick facility, the carousel is a joyful gathering place for local residents and tourists alike and it continues to serve as an emblem of ongoing community collaboration. New animals are being added to the “Herd,” including the University of Oregon’s Duck mascot, and, coming soon, its Oregon State University counterpart, Benny the Beaver. Now there are plans to build a “Stables” annex that would house an enlarged carving workshop and space for educational programs.

The Salem Riverfront Carousel, like Jane’s Carousel, also operates year-round. And for this holiday season, the Salem carousel will be offering free rides on Christmas Day and New Year’s Day, with a suggested donation of non-perishable food items for the local food bank.

Who knows? You might even catch a glimpse of the carousel’s founder, “Mama Hazel,” who still stops in on occasion to check on this beacon of color and light overlooking the Willamette River.

Photo of the Salem Riverfront Carousel by Daniel Wend