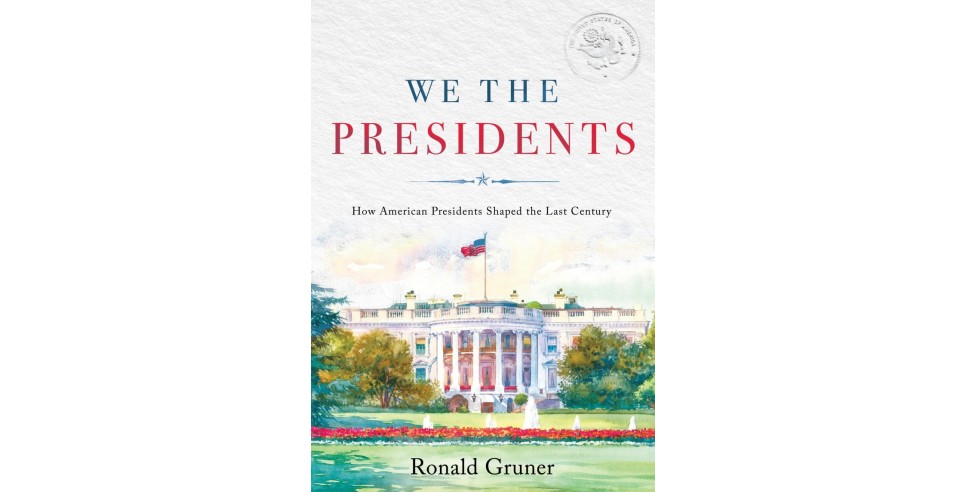 A number of historical books cover American Presidents, but none is as singularly focused as Ronald Gruner’s new book We The Presidents. Mr. Gruner’s experience as an accomplished executive and founder of several technology companies has resulted in a much different perspective of presidential history. His focus on one hundred years of U.S. presidential history is shown primarily through an economic lens. Beginning with Warren Harding in 1921 and ending with Donald Trump in 2021, Mr. Gruner’s book, rather than examining a single presidential administration in isolation, establishes the many connections linking presidential administrations. It’s an ambitious task for a writer to undertake a massive work that will reside on the same bookshelf, so to speak, as Doris Kearns Goodwin’s Leadership: In Turbulent Times or The Complete Book of US Presidents by Bill Yenne.

Ronald Gruner is neither an academic nor a seasoned historical writer, but his book offers readers three qualities that have been lacking in many of the recent books touching upon the presidential office: neutrality, accuracy and above all else, respect. (Who could forget the avalanche of historical books disparaging Donald Trump and cashing in on his tumultuous presidency?) With Mr. Gruner’s book, there is no sensationalism. Devoid of yellow journalism, crackpot exaggeration, the propagation of false accusations, and the churn of the rumor mill, Gruner’s book is an antidote to the American Political Industry that has sharply divided America. Much of the nation’s news media has become overtly politicized, forcing Americans to choose their news sources based on their political views by reading or listening to the media pundits who already echo their beliefs. Add think tanks, political hacks and lobbyists, academic curricula, legions of P.R. and marketing firms, and experts who are paid by partisan groups to promote the political and economic ideology of their sponsors. Whom can you believe?

Regardless of political affiliation, most people do want to know the truth—they want facts without editorializing. Mr. Gruner intentionally minimizes using political labels or referring to political affiliations. He invites us into a narrative that is borne of public service, exploring presidents from a neutral position. Gruner is a citizen in every sense of the word with a moral conscience. A lover of history and a deft researcher, he sets the record straight. He focuses on effects rather than root causes, and on results rather than partisan politics. Can any book about U.S. presidents completely steer clear of politics? You decide.

While We The Presidents is largely storytelling by the numbers, neutral anecdotes backed by hard data reveal the cracks and fissures that have always existed in our democracy. The complex interests of our nation have always embraced divergent, if not contentious, points of view, even going back to our founding fathers. Treasury Secretary Alexander Hamilton belonged to the Federalist Party and supported a strong federal government, whereas Secretary of State Thomas Jefferson, who belonged to the Republican Party, supported states’ rights. From Harding to Trump, there has always been tension between capital and labor, progressives and conservatives, and the proponents for big government or small government. Racism, Protectionism, Discrimination, and anti-Immigration policy have been around for longer than a hundred years.

The clear patterns that were established among multiple presidential administrations are explored. For example, several Presidents have used very similar political platforms and campaign slogans. In the 1920s, Warren Harding campaigned on two platforms that were joined at the hip: “A return to Normalcy” and “America First.” Sixty years later, to counter the drift away from Americanism, Ronald Reagan ran on “Let’s make America Great Again,” just a tad similar to Donald Trump’s 2016 campaign promise to “Make America Great Again.” Mr. Gruner’s analysis of Warren Harding extols his accomplishments and dispels Malcolm Gladwell’s assertion that Harding just looked presidential. President Harding signed bills that laid the foundation for the Veterans Administration, the Office of Management and Budget (OMB) and Medicaid. To counter racism, Harding risked the support of his white southern base by telling a crowd that democracy is a lie unless you stand for equality…. After the devastation of WWI and the Spanish influenza pandemic, Harding did indeed provide Americans with a return to normalcy.

The economic decisions implemented among presidential administrations are firmly grounded in taxation. Mr. Gruner chronicles the long history of Americans vehemently opposed to being taxed. Ratification of the 16th amendment in 1913 is when congress imposed a permanent income tax. (Andrew Mellon was appointed Secretary of the Treasury by President Harding in 1921, and continued to serve under Presidents Calvin Coolidge and Herbert Hoover.) Andrew Mellon’s taxation theory, known as supply-side economics, emphasizes debt reduction, tax reduction, especially reduced taxes for business, and a balanced budget. Later, in post-modern times, supply-side economics, also known as “trickle down economics,” was also ascribed to Arthur Laffer, often called the Laffer Curve, and favored by Presidents Reagan and Trump.

Herbert Hoover had been in office less than a year when the stock market crashed. President Hoover and Treasury Secretary Mellon deliberately chose not to intervene. “Prosperity cannot be restored by raids upon the public treasury,” Hoover famously proclaimed. A year later banks failed, business profits collapsed, and unemployment nearly tripled. The Great Depression turned Herbert Hoover and Andrew Mellon into victims of their own prior successes—both men believed in laissez-fair capitalism unhindered by an intrusive government. Hoover’s rugged individualism still prevails today and influences the debate over the role in government in education, healthcare and social programs.

The flip side of supply-side economics is supply-demand economics and is sprung in large part from the thinking of the economist John Maynard Keynes, who argued that governments should solve problems in the short run rather than wait for market forces to fix things over the long run. President Franklin D. Roosevelt came to power in 1933, when fear had paralyzed the country and the nation was in the stranglehold of the Great Depression. If business wasn’t hiring, then government would. Roosevelt’s New Deal increased Americans purchasing power, established liberating labor regulations and created a safety net of unemployment insurance, pension plans, and workmen’s compensation. The Works Progress Administration (WPA) put 8.5 million back to work. Roosevelt became the nation’s largest employer. The Social Security Act and the Glass-Steagall Act were both signed into law.

The long litany of presidents following FDR is examined from an economic perspective, ranging from the Gross National Product (GNP) to the debt ceiling each president inherited upon coming into office and what each president left behind as his final legacy. Other metrics of comparison, ranging from the rates for unemployment and poverty to crime and home ownership, are also firmly set forth and rigorously scrutinized.

Herbert Hoover vs FDR—today American presidential economic policy remains divided and tends to fall in line, following the economic policies established by either the laissez-faire, small government approach (supply-side) of Herbert Hoover or the hands-on, big government approach (supply-demand) of FDR. Examining the complex budgetary and spending issues that have beset every presidential administration illustrates the two divergent economic theories, supply-side economics (Andrew Mellon, Milton Friedman, Arthur Laffer) or supply-demand economics (John Maynard Keynes), that have been consistently spearheaded by each president. Today’s demands for universal healthcare, free college education, renewable energy and basic guaranteed income are similar to the benefits provided by Roosevelt’s New Deal. It will be interesting to see which economic theory (supply-side or supply-demand) will prevail.

Presidential economic policy is not necessarily governed by partisan affiliation. (Generous tax cuts were initiated by Democratic Presidents Kennedy and Clinton.) Of great interest, though, is Mr. Gruner’s assessment of social security. For many years social security took in more money than it distributed in pensions. Social security paid for much of Ronald Reagan’s increased defense spending, Bill Clinton’s budget surpluses, and George W. Bush’s Middle East wars. As baby boomers retire in droves, Government is now grappling with how to repay those massive loans to keep social security afloat. President George W. Bush’s plan to privatize social security in 2005 failed. President Trump had indicated in 2020 if he was reelected, he intended to eliminate employee payroll taxes—that would completely exhaust the social security trust by 2026. Again, it will be interesting to see in the long run which economic theory will prevail and determine what happens to social security.

In Mr. Gruner’s final analysis, every President of the United States has done some good, and has left a long-lasting economic legacy even in the midst of horrific challenges such as war, economic collapse and health crises. We The Presidents succeeds in showing us that it is possible to focus on outcomes instead of causes; on results rather than politics; on economics rather than ideology and on the connections linking presidential administrations rather than a single isolated presidency. While the book’s epilogue leaves us in the throes of the Covid Pandemic, the U.S. withdrawal of troops from Afghanistan, and the January 6th Insurrection, fasten your seatbelts and stay tuned—this could be the neutral, fact-driven subject matter of Mr. Gruner’s next book.