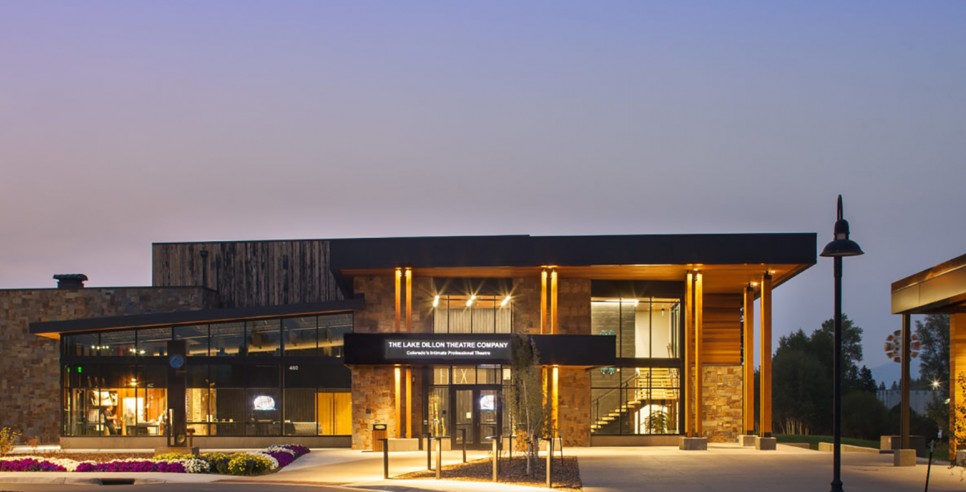 When the pioneers first came out west to either ranch, farm or mine, theaters sprung up as quickly as the settlements. In those days, they were called Opera Houses. Today, there is a new breed of settlers: skiers, snowboarders, bikers, hikers and retirees. And they, just like their forefathers, are continuing to build theaters. One of the most recent ones is The Lake Dillon Theater Company in Silverthorne, Colorado close to Arapahoe, Keystone, Copper, and Breckenridge ski areas. Like the old opera houses it too has its unique story.

Within spitting distance of Silverthorne is the Dillon reservoir to which the Denver Water Board owns the rights. When the area was initially flooded by damming up a local river the original town hall, a small dark wooden building, was moved within a safe viewing distance of the reservoir. At the end of the 20thCentury, a group of theater lovers took it over and naturally called it The Lake Dillon Theatre Company. The theater had only 70 seats. At first it was a troop community theater meaning it was crewed by volunteers. When more money came in non union professionals often performed.

In 2008 the company finally was able to hire equity performers. Christopher Alleman who is the producing artistic director of the theater, says, “When we produced in 2010 the musical Hairin our small theater, we received a lot recognition statewide. Our theater also started to envision a larger facility.”

A theater needs rehearsal space, changing rooms, areas for offices and storage room for scenery equipment. Silverthorne, known for its location near the big ski areas, discount malls and retail outlets, open spaces slated for homes and condominiums, offered to build a theater for them. In 2014 The Lake Dillon Theatre Company opened in its new state-of-the-arts theater.

Plays and musicals are planned a year and a half in advance. Christopher emphasizes that their decisions are influenced by what the community wants to see and what has not yet been performed in Colorado. People like to revisit old favorites, other like to have their minds challenged.

It would take more than one article to describe all that this theater does to reach out to the local areas. A partial list includes workshops for young aspiring actors, cabaret nights, and naturally must-see plays.