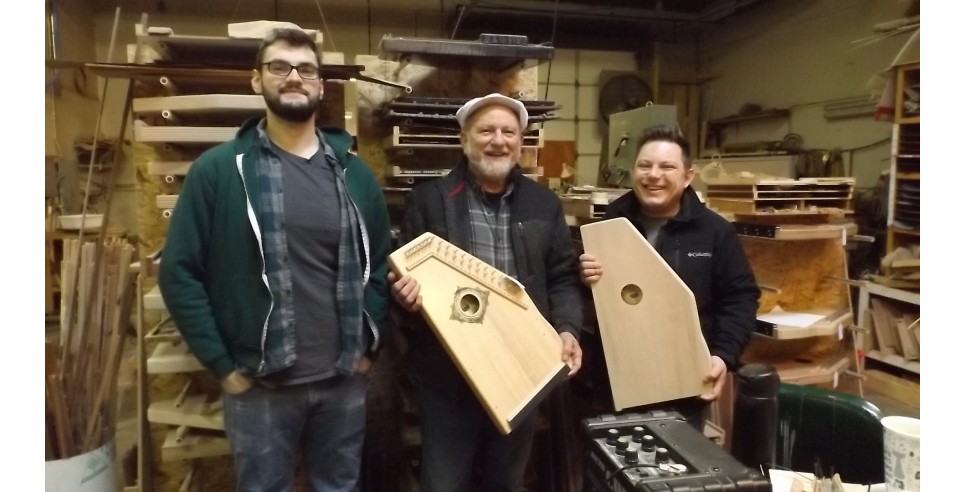 Although it is tucked into an industrial park that’s situated directly under the flight path into SeaTac International Airport, d’Aigle Autoharps almost seems like a throwback to a pre-jet-setting era. Out in the parking lot, jets with their landing gear already down scream overhead every minute or so, but step inside the door of this cozy folk instrument store and you’ll find not just autoharps, but a generous array of guitars, banjos, mandolins, sitars, Celtic harps and dulcimers, hearkening back to simpler times and pleasures.

And if you peek through the door that leads into the large workshop in back, you’ll see racks of instruments awaiting repair; bins and barrels and shelves filled with walnut, spruce, cherry, cedar, maple and myrtlewood; and stacks of autoharps in the process of being built.

There’s also a popcorn cart – “That’s the most important machine in the shop,” owner Pete Daigle jokes. No one on the staff goes hungry.

In spite of his laidback manner, his casual dress, his pleasant and frequent cackle – Daigle is plenty serious about his craft.

As a self-taught luthier specializing in autoharps, he has been responsible for a series of patented innovations to a popular, portable instrument that first appeared on the music scene back in the 1880s.

“We scrutinize every detail of our instruments,” the daigleharp.com website promises. “When we see that an improvement can be made, we make the necessary adjustments.”

Daigle has been working – and playing – with wood since he was a tyke. His dad was a carpenter, and when Daigle was a kid, he loved hanging around his dad’s workshop, picking up wood scraps and trying to make things. By the time he was seven years old, he’d built himself a play ship with a 15-foot crow’s nest. He went on to build cabinetry and fine furniture.

He also received piano lessons as a boy, then took up the drums, and eventually joined a dance band that toured the Pacific Northwest for a number of years until disco and DJs became all the rage and the demand for live music dropped off.

Daigle recognized it was time for a change.

His wife Polly had already been playing an Oscar Schmidt autoharp for a few years – it had been his gift to her on their first anniversary – and one day he picked it up, strummed around on it a bit, and began to think that he could make something better.

He tinkered around and built a prototype that he took to the then-nascent Willamette Valley Autoharp Festival, the first such festival west of the Mississippi.

The first question he got was, “How much?”

And that’s how Daigle found himself in the autoharp business. What started in his home workshop expanded into a commercial business some 20 years ago, and the storefront opened nine years after that.

Today, Daigle’s business supports four full-time employees (including his son, Keith) and one part-time helper. It hosts periodic jam sessions and workshops (the popcorn cart comes in handy for that), and it has become the largest builder of autoharps outside of Korea. The company ships instruments to every continent except Antarctica, and designs different styles – solid wood (the Cascade model), composite ply (Desert Rose) and several more, including a carbon fiber autoharp.

Daigle aims to suit all sizes of players and levels of play. Stars like Sheryl Crow, and Heart’s Ann and Nancy Wilson, and Alessandra Salerno all play d’Aigle autoharps.

But the company also administers the Autoharp Angel Program, which provides autoharps to people who would love to play but don’t have the means to acquire an instrument. The program is a cooperative effort among members of the autoharp community – d’Aigle Autoharps accepts donations of playable autoharps, fixes them up as needed and sends them to folks in need, along with an electronic tuner and a beginners book. All donations are tax deductible.

So what’s next for the company?

“Antarctica,” Daigle vows. “We’re working on that. The winters are long down there – they need music.”
He pauses and a gleam comes into his eye. “And maybe the Space Station, too.”