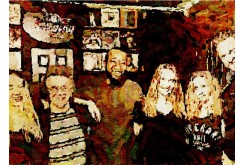 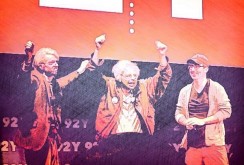 So I’m sitting in the audience at the 92nd Street Y playing with my phone, while waiting for Gil Faizon and George St. Geegland to take the stage for an interview moderated by John Oliver when I felt a tap on my arm and a voice said, “Stop playing with your phone and watch the show!” And it was Lynn Kroll, mother of Nick Kroll who was rumored to have been there too, along with John Mulaney. And I said to her, “I was wondering if you’d be here.” And she said, “Would I ever miss a chance to see my son on stage?” A question that did not need to be answered! Needless to say it was a fantastic show. John Oliver came out wearing a baseball cap which he kept on the whole time, and read an introduction which he claimed was written by Mssrs. Kroll and Mulaney in which he stated that he’s either English or British, and went on to mention other shows coming up at the Y like “The History of Jewish Texting”, and “Another Goddamn Evening with Norman Lear” and this time his hat spoke. That’s MY kind of comedy. I actually did a film about a man who introduces people to his hat. Then George and Gil came out to thunderous applause, and the way they bounce off each other takes improv to a new level. Every single line got a huge laugh. Not like laugh, pause, laugh, pause, but laugh, laugh, laugh. They had amazing lines like when Gil said that Anthony Weiner should have been nominated at this year’s Tony Awards for “Smoothest Chest.” At a couple of points, John Oliver was literally crying with laughter. He had to wipe his eyes.