Criminal justice reform – “getting at” a better model 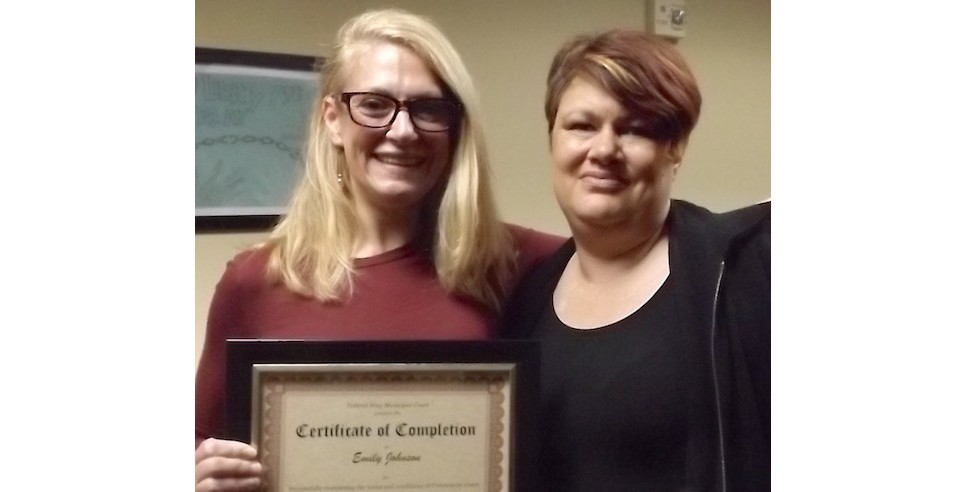 “I run a repair shop, not a junkyard.” It’s a motto Dave Larson spouts – frequently. But he is no auto mechanic.

Larson is a Municipal Court Judge in Federal Way, Washington, a community of just under 100,000 people, located between Seattle and Tacoma. This city has experienced most of its growth as an affordable bedroom community to those larger cities to the north and south. Now it’s struggling to establish an identity of its own, while grappling with all of the attendant crises of the 21st century – including the opioid epidemic, homelessness, and crime.

Federal Way’s Municipal Court is located in one of the office parks that sprawl throughout a city that grew up around a shopping center, not a civic hub. The courtroom is a typical set-up – fluorescent lighting, gallery seating and an elevated judge’s bench, backed by federal and state flags, each planted in a floor stand.

And when Judge Dave Larson enters wearing his black judicial robe – everyone stands.

Larson is a blocky guy with silver hair, dark eyebrows, and the energy of a dynamo. He spent years as an attorney in private practice, gaining local renown for helping prevent the Seahawks football team from being moved out of Seattle. The final case he worked on in the private sector was a property damage case on behalf of the King and Queen of Thailand.

“And now I’m working on traffic misdemeanors,” he says with a ready smile.

Don’t let the self-deprecation fool you. It may not look like a step up in his career, but Larson – who grew up in Federal Way – knows he has come home to do important work. Over the years, this community has developed a less-than-stellar reputation. Some cynics call it “Felony Way,” and urbandictionary.com entries variously describe this community as a “soul-less suburb” and “nothin’ but a cheap ghetto where I can use my Section 8 vouchers.”

But Larson is a popular judge who is working to turn things around, particularly with the new Community Court that has been in operation for the last year. It happens every Thursday morning, and it’s available to offenders who have committed misdemeanors or gross misdemeanors.

“Here in this court, we don’t deal with statistics, we deal with human beings,” Larson explains to the folks scattered on the benches throughout the courtroom on a recent Thursday.

“This isn’t a checkbox court. The checkbox method has a high instance of recidivism, but I’m not a checkbox judge, and these” – he indicates Prosecutor Jennifer Zorn and Public Defender Karama Hawkins, sitting side by side at the table in front –  “are not checkbox lawyers.”

The Community Court aims to be therapeutic, rather than punitive. But that doesn’t mean offenders are let off the hook. Rather, they’re required to do a deep dive into the causes that led them to engage in criminal behavior.

Larson notes that many of the people who come before him in this court are struggling with addiction or untreated mental illness and sometimes a combination of the two.

“Every case is as individual as a fingerprint,” he says. “What we end up doing is trying to build up that person’s belief in themselves, overcoming what got them where they are. You see what I’m getting at?”

At these weekly Community Court check-ins, instead of presiding from the bench, Larson comes down, shakes hands with the defendant, and sits right down with them. There is a sense of camaraderie among those sitting at that table – the teamwork between judge, defendant, prosecutor and public defender is evident – there’s even room for occasional banter about horoscopes or the benefits of a keto diet. (One of the defendants is really after the Judge to adopt healthier eating habits.)

For every case, Larson follows up on the goals the prosecutor and defender had set up for the defendant the previous week – whether that was to make an appointment with a mental health counselor, attend a recovery group, find housing, or apply for a job. It can be hard to navigate the disjointed array of judicial requirements, employer expectations, social services and medical assistance. If the defendant hasn’t accomplished what was asked of them, Larson and the rest of the Municipal Court team find out why and coach them to identify what they need to do differently to succeed at the task.

On the other hand, if the defendant has met that week’s expectations, they receive warm affirmation from everyone sitting around that table – judge, prosecutor and defender. For many of these defendants, that isn’t something they’ve been getting a lot of in their lives, and it can be transformational. Larson calls it “the magic of dignity and respect.”

When Larson interacts with these Community Court defendants, he speaks with enthusiasm, illustrating his ideas with an assortment of analogies (e.g. “I’d like this court to be a Swiss Army knife”) and punctuating his delivery with that phrase again – “You see what I’m getting at?”

Then goals are made for the next week, and no participant in the program leaves without receiving a brown bag lunch put together by one of the court staff. One defendant also leaves with a sack of dog food, brought in by one of the volunteer court mentors who knows they have a new puppy to look after.

These volunteer mentors are on hand to provide help of many kinds – computer assistance or rides to appointments or words of encouragement.

On this particular Thursday, a graduation ceremony has been scheduled immediately following the court session. It is attended by local dignitaries, family members, the arresting officer, and some new Community Court prospects. There are short speeches, some delivered through tears. Small gifts have been arranged. There is a decorated cake waiting to be cut into.

The first person ever to graduate from this Community Court program has come back to witness this ceremony.

Before getting arrested and going through the Community Court program, she had been homeless, living with her family in a tent at a nearby state park for more than half a year, and boosting merchandise from the local mall.

Today she has a license, a car, and a roof over her head. But she still has some struggles.

“I know that I still have more to grow, and I still have these people to turn to,” she says. At the same time, she’s become part of the support system for those who are going through Community Court now.

The two women who are graduating this day are both mothers of young children. Both had been hooked on heroin.

One of them, Emily Johnson, had had a good job as an EMT, but suffered an on-the-job injury. That led to an addiction to pain pills, until she discovered that heroin was cheaper.

Johnson lost her job, her house, and contact with her daughter. She hung out in casinos when she had nowhere else to go and shoplifted clothes to stay warm. Eventually she was arrested on a Theft 3 charge.

Graduating from Community Court, Johnson praises the program for sticking with her through a rough hospital stay, a detox and recovery program, and the effort to regain permission to see her daughter. She is now ten months sober.

She believes this wouldn’t have happened if she had gone through a traditional court process.

“I spent so much time out there losing myself, how could I find myself in 30 days?”

She needed long-term, focused attention to help her get back on her feet. Today she is living in a halfway house, and she is optimistic about what comes next.

“Losing everything has given me the chance to build my life exactly how I want it.”

And that’s the spirit Judge Larson is getting at.