Inside a Party, Plus Mike Cannon, Marina Franklin and More 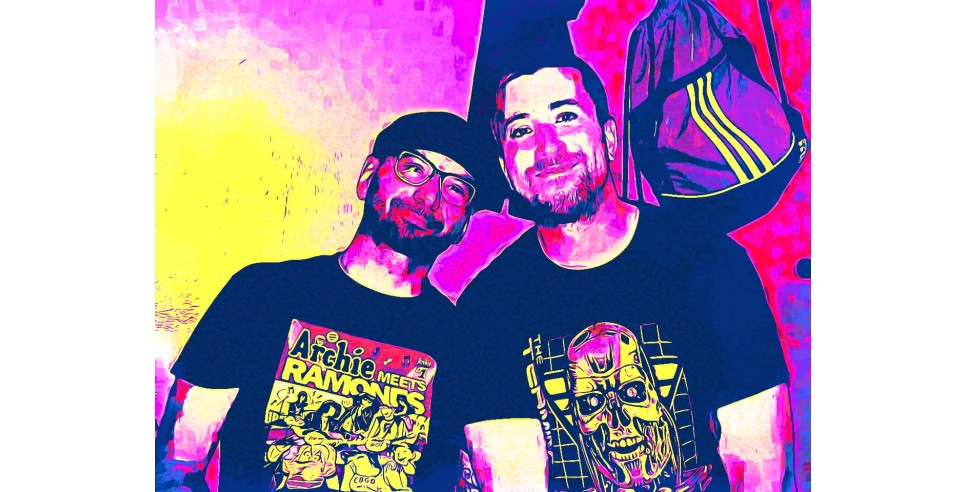 I dropped by New York Comedy Club late one night and ran into James Mattern and Mike Cannon in the green room. James had just gotten back from Montreal where he hosted all 8 tapings of Kevin Hart’s LOL Live shows, for the third year in a row. And he’s such a good host that he wound up being asked to stay an extra day from Sunday till Monday, at the festival’s request in order to host the Netflix taping for British comics at the Monument Nationale.

Mike Cannon had some good news to share about his first special with 800 Pound Gorilla called I Think It Just Kicked In. It recently hit 1.3 million streams on Pandora and 1.3 million screams in every household that listened to it! (My line! LOL) He taped it at New York Comedy Club and told me he was really psyched about recently being passed to perform at The Cellar.

Congrats are in order to Nicky Paris who’s been tapped as the red carpet host for the 5th Annual Burbank Comedy Festival featuring Jeff Garlin, Daniel Franzese, the Cast of Animaniacs and over 200 hot comedic talents from around the globe. Nicky is known for his appearances on the Wendy Williams Show and MTV as well as his club appearances and will be covering the festival’s 5-stages from next week. I asked Nicky how he felt and this is what he told me: “I’m ecstatic to be hosting the red carpet as well as performing in Burbank’s Comedy Festival this year. There is so much talent being showcased throughout these five days! I’ll be interviewing everyone but I’m most excited to interview Daniel Franzese of Mean Girls – that movie is the American classic. Sorry, Seabiscuit.”

Congrats also to Michelle Buteau who will star in Paramount Network’s tv series First Wives Club next year. It’s based on the 1995 film of the same name.

There’s a new cool showroom around and it’s called Green Room 42 based out of Yotel on 40th Street and 10th Avenue. Stand-Up New York used it for it’s latest pop-up show this past week, and the room is beautiful. It’s like stepping into the showroom of a casino in a cool hotel. It was very well appointed with very modern fixtures such as a special cool light on each table that you light up when you need waitress service, and club owner Dani Zoldan was there to watch the festivities. Stand Up GM Jon Borromeo was there too welcoming everyone and making sure everything ran smoothly which it did. Zach Andresen hosted, and the show featured Kevin Hurley who co-hosts the Passed Podcast with Jon Borromeo, Mike Lasher, Erin Maguire, and Sherrod Small, who I wound up sitting with at Tony Rock’s headlining show at Gotham.

Tony was on fire this week at Gotham when he headlined. I went twice because it was so good. Tone was on his A-game and is a total BEAST on stage. The table next to me was laughing so hard I was afraid they were all going to throw up! One guy actually fell back against my table. Somewhere towards the end, Sherrod slipped in beside me so we could laugh together. He and Tone are cousins, and grew up together and auditioned at The Comic Strip on the very same night and got passed together. I’ll never forget the story that Tone told me of how they literally cried on the corner together, with tears of happiness, after being passed by notoriously difficult club booker Lucien Hold. Tone’s bit on the degrees of “Blackness” was masterful and his ability to go back and forth from street lingo to his “white voice” is truly impressive. Richie Redding was the host and he’s always strong, and James Goff was the feature and when I came into the club they were hanging out in the back of the room together.

Tony does amazing crowd work and finds his people right in front like the Black guy he found who happened to be named Tyrone, with his white fiancee who met at a check cashing place. You can’t ask for a better set-up than that! After the show we all went down to the green room to hang out and it was filled with friends and well-wishers. Tone told me he’s in the middle of his Rock the Mic Tour but that he’s really excited about his upcoming tour with Mike Epps along the entire West Coast. It’s so popular they had to add on a whole bunch of shows. Tone told me that he wanted to give Mike a special shout-out in this column because as he said: “Mike could have chosen anybody in the business to be on the tour with him, but he picked ME!”

I ran back to Gotham to catch Tony Rock’s last show the next night, and this time was joined at my table by Marina Franklin who was also featuring on the show. She had some big news too- she’ll be taping her first hour special in Chicago at the Vic Theatre next month, and it will be produced by the same company that produced Noble Ape, Jim Gaffigan’s newest special. The tentative title is Single Black Female, and if Marina is single I’m sure it’s her choice! She was exhausted because this would be her sixth set of the night as she said The Cellar was doing early shows now, but you couldn’t tell she was tired by the energy she brought to the stage. When she left Kareem Green joined me and told me how cool it was, and what a good time he had for his first time performing up in Montreal at JFL.  Tony Rock had all his childhood friends in the back row, who he shouted out from the stage, and said they didn’t pay for anything and it was gonna come ouf of his paycheck at the end of the evening. It was a great night!

I went to the wrap party for Season 3 of Crashing and I couldn’t miss that. I was kind of keeping it under wraps that I make an appearance in the new season but director and Exec. Producer Judd Apatow posted a photo on Instagram of me at a table at The Cellar with Colin Quinn and Kevin Brennan, so I guess the cat is out of the proverbial bag, and when I saw the post, it already had over 4400 likes. I wrote to Judd and thanked him and told him it would probably be the only time I was ever able to be in something on IG that had over 4400 likes!

The wrap party was out in Brooklyn at a place called Northern Territory and it was a cool place with a huge roof deck. It was invite-only and they served great food, including all kinds of tacos, chicken sliders, and a great variety of stuff, including of course an open bar. Pete Holmes was there with his wife Valerie and they are expecting their first child in about six weeks. They are both very excited and we had a long talk about the blessings of being a parent and how special it is to be able to have that gift.

And Lauren Lapkus who plays Jess, Pete’s ex-wife on the show was there with her real-life boyfriend Mike. I asked Lauren how she wound up on the show and she told me that she and Pete had known each other when they were both living in Chicago and she was doing sketch work with UCB and he was working on his stand-up. She first moved to NY and then out to LA where she is now, and her agent sent her on an audition for Crashing. She got a callback and on that callback, she got to audition with Pete where they re-connected after not having seen each other for a while. She says jokingly that she doesn’t think he knew her name for ten years. She also knew George Basil for a long time, and who was also at the wrap party. George plays Leif, the guy she left Pete for on the show. Leif also plays an amazingly fun part and I told him that somehow he managed to channel the “love” energy from the 60’s in his character, who despite what he did in ending Pete’s marriage, by cheating with his wife, Pete can’t seem to get angry at him, because he always hits Pete with his hippie-style 60’s view of life, like “ why can’t we all just get along, and it’s all about LOVE” attitude. Lauren told me that in Season 1 when they first started they all did an improv show together to get the feeling of working together, and off of each other.

I asked George about how he wound up with his role and he said he was originally from Baltimore, but had met Pete about 5-6 years before in NY at a commercial audition, and then when Pete was getting ready to do Crashing he called George in for a table read. About a month later he was told he had the part. He said it was the only gig he ever got from a table read. And he wanted to make sure that Pete and Judd knew that he’s is so grateful for the role. He said, “it’s a pleasure to do, and exciting each and every time.”