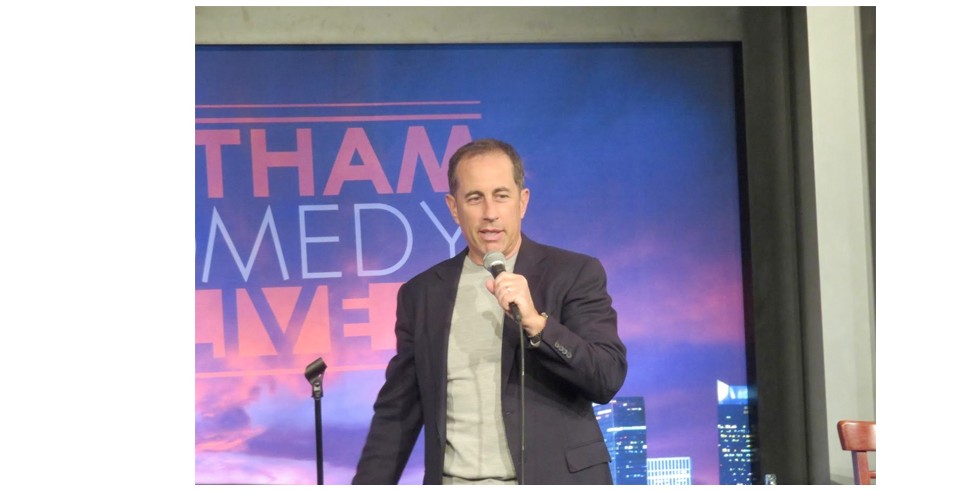 J.B. Smoove was headlining Carolines Comedy Club and I absolutely love J.B. Smoove, so I made sure I got over there to see him. The place was packed. J.B. doesn’t even have to speak to be funny. His physicality is funny. He’s just a funny, funny dude. He is often one of the best dressed and sharpest guys in the game, but this night he performed in a V-neck t-shirt, and still looked like one of the sharpest guys in the game. I sat in the back with Alexis Guerreros who has the same manager as J.B., Rick Dorfman of Authentic Talent & Literary Management. Rick’s wife and look-alike son were there too. What’s amazing about J.B. is that he improvs a lot on stage, but acts out every bit and even choreographs it. So many people don’t know that he started out as a hip hop dancer in a two man team called “Smoove and Groove.” And he moves like a dancer throughout his act. He’s got a million things coming out. They already shot the 9th season of Curb Your Enthusiasm which starts airing in September. He’s working on material for a comedy special, selling a few ideas of his own and he’s got a book deal with Simon & Schuster with the working title of The Book of Leon.

When Alexis and I got up to greet him, I noticed Alexis looked a lot thinner. He told me he went from eating like 20 pieces of pizza a week to about three a month, which is not easy for him because he does shows about food. He’s got a podcast with comic Mike Albanese who I met when I was performing in Atlanta and who lives here now. It’s on Facebook Live every week and it’s called “FATVENTURE”. It’s the two of them talking about food. And he said they’ve developed a good following. Lots of people seem to like food!

I popped into The Stand and ran into Pete Lee who is all excited about an upcoming Fallon appearance. He doesn’t have an exact date yet, but Jimmy came to a showcase he was on to check out Roy Wood Jr., saw him perform and Pete said in the middle of his set Jimmy stood up and clapped and complimented him on a joke. Afterwards, Jimmy’s producers came over and told Pete they’d like him to be on the show. He’s hoping for May. Paul Virzi and Yannis Pappas were there and were heading out to a cigar bar which just happens to be in my building. I decided to show up to catch them in action and see how “real men” hang out!

Comedy Juice was its usual hot self this week, especially with Aaron Berg hosting. The guy fires off jokes like a Gatling gun, and I have no idea why I used such an arcane reference! But he does. We talked about his wife, comic nee Christine Meehan who’s due to give birth in September. Aaron’s Gatling gun is firing real bullets! Iliza Shlesinger came up and did what felt like a double-length set. That’s not to say she was on too long because she’s always funny. It just felt extended. I wanted to ask her if she was preparing for something special, but she ran out so fast to her next gig that all we had time for was a “Hey, what’s up?”

Pete Davidson came in early and hung out for awhile before going up. I was able to congratulate him on his newly found sobriety which has been all over the press, so I’m sure he won’t mind me mentioning it. He jokingly said sobriety is boring, but I don’t know if he meant it or not. He had advice for the audience, “ Never pick a rehab when you’re high!” Watching Pete work is a lesson in stage comfort. Although he’s only 23, he’s been performing for so long and with his gig on SNL, he’s comfortable trying out lots of new stuff, including really edgy material, and what’s cool is that he doesn’t seem to care if it works or not. Fortunately, it does. But that is the essence of a true comedian, having the courage to say what’s on your mind. It’s how you continually get better.

New York Comedy is always doing something new. Now they have an improv stand-up show. As if either of them is not hard enough on their own, they had to combine them. The audience yells out ideas and the comic is supposed to do jokes about that topic. Some like Emma Willmann admitted to the audience how hard it was, especially because you’re depending on the comedy chops of the audience to come up with potentially funny ideas. And John Fugelsang was a master at this. There wasn’t even a break in his flow. And you’re not allowed to do any material you’ve ever done before. It all has to be made up on the spot. John was amazing. Like the rappers who can spit beats in a battle on the spot. John is the host of the newly announced Page 6 TV which looks like a go. Mario Cantone was also announced to be part of the Page 6 TV panel discussing Page 6 related events. And John says it’s very ironic that he’s hosting a show like that, because he spent so much of his career doing political-type humor and now he’s gotta do all this pop culture type stuff. But seeing how he improvs material, I know it won’t be hard for him to do. I asked him how his role on Page 6 TV came about and it’s an amazing story. They saw him in someone else’s tape. He didn’t even apply. Someone sent in an audition tape of themselves on Wendy Williams and John was on the tape, they thought he was interesting and called him in. He has no idea who the tape belonged to or whether they got to audition for Page 6 TV either. All he knows is that he’s on.

Jordan Rock was there and also did very well improv’ing material. I love seeing Jordan perform and how he’s developed from working so hard. Five or six years ago, he and I alternated hosting late night at The Comic Strip, and now he’s in the midst of filming Season 3 of Judd Apatow’s “Love” on Netflix. He said that this season, he’s “in the real world” and not just Gus’ friend anymore. They shoot in Cali and he’s just in town for a week, hosting at The Strip on most nights. He told me his brother Tony is killin’ it. He’s already the host of TV One’s new prime time game show “The Game of Dating” and he just scored a major role in the new CBS Show “Living Biblically” where he plays a character named Vince, the best friend of the lead character, Chip.

I went to see Yannis Pappas headline at Gotham and was surprised to see owner Chris Mazzilli there on a Thursday night. Then I saw why! After the opening act, he escorted Jerry Seinfeld into the room. Jerry has been coming in there 2-3 times a week to prepare for his upcoming Netflix special. When they announced him, he got a standing ovation. People actually seemed shocked that they were getting a chance to see Jerry. He did about 40 minutes, and was so engaging with the audience. He told them again about how he got started back in 1976, and how he went from having basically one joke to five years later sitting on the couch of The Tonight Show starring Johnny Carson. During his set a woman yelled out, “I love you Jerry” and he said “I love you too!” and then said that’s his favorite type of relationship. “I love you, and you love me, and we’ll never actually meet!” Jerry and I have a secret, and of course I can’t divulge what that is, but I’ll be able to tell you soon. As he was leaving, I confirmed with him that it should be kept a secret and he agreed. So it’s a secret!

Yannis had no trouble following Jerry’s standing ovation and the crowd was cool with the extra long show. Chris told him he would kill and he did. And at the end, or what I thought was the end, he raced off the stage so fast, I couldn’t imagine what was happening. He literally ran out of the showroom. Emcee Sergio Chicon who Yannis told the audience had never been so far out of the hood before, took the stage and did material until Yannis came back out dressed as his character Maurica, the outspoken Latina chick. That’s why he was running so fast. He had to do a quick change, put on make-up and get back out there. At one point, he brought Sergio back up with him and they riffed together.

Put this under the heading of “everyone wants to do comedy!” I went to a party for Dionne Warwick’s granddaughter Cheyenne Elliott and met hip-hop star Freedom Williams the lead singer of C+C Music Factory with tremendous hits like “Gonna Make You Sweat” ( Everybody Dance Now) and he told me his greatest dream was to do stand-up comedy. I offered to help him. We’ll see.

Congrats to comic Scott Rogowsky on scoring his hosting gig on a new show called “Start Talkin’” on Complex Networks and Verizon Wireless’ streaming platform go90. It’s a new spin on traditional talk shows where instead of interviewing only stars, he’ll also be interviewing regular, everyday people from aspiring actors to potential threesome candidates. The first show aired April 12th. go90 is available on the web, iOS, and Android and Scott got his hosting experience from doing his long running show “Running Late with Scott Rogowsky” which ran at Carolines for awhile and was a fun show I was on a few times.

Gladys Simon is a legendary figure in comedy. She’s not only a comic, but also a mentor who has guided the careers of many considered to be superstars today like Jim Gaffigan, Jeffrey Ross and Zach Galifianakis. From the days when she ran Hamburger Harry’s in Times Square till today when she does her shows at The Comic Strip, she runs what is probably the best open mic show in the city on Wednesday and Friday nights, and also does a monthly regular show at The Strip. She gave so many comedians their start and they’re very loyal to her. Jim Gaffigan stopped by The Strip this past week just to do a spot on one of Gladys’ shows.

Jeffrey Gurian is a comedian, writer and all around bon vivant in New York City. Subscribe to his YouTube channel, Comedy Matters TV.  Photos below Jeffrey with John Fugelsang, Jordan Rock and Pete Lee.